Young black bear seen in NE Bend, tranquilized by ODFW at city facility to be released in forest 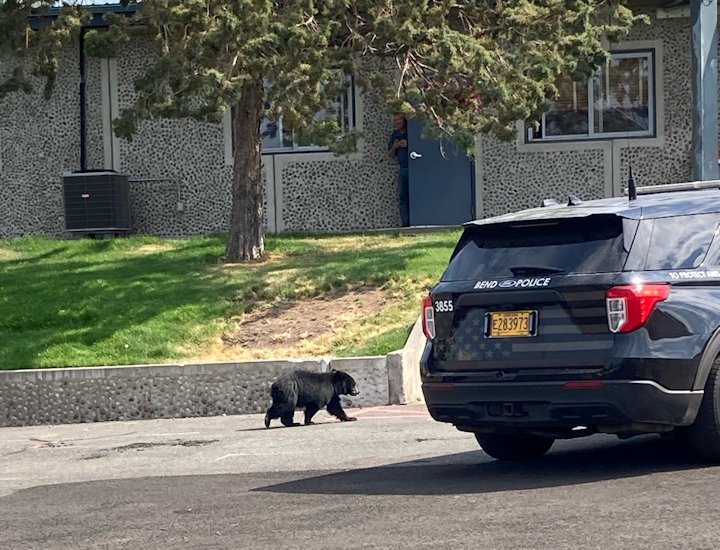 BEND, Ore. (KTVZ) – A young black bear that was spotted by citizens in northeast Bend Tuesday night and turned up at a city facility Wednesday was tranquilized by the Oregon Department of Fish and Wildlife, which said it will be released back into suitable habitat on the Deschutes National Forest.

The male bear is approximately 7-8 months old, a “cub of the year” that would have been born in late winter (January or February), ODFW said in a statement.

While young bears are typically still with their mothers at this age, they are also capable of surviving on their own in the wild. the agency said.

“It is unclear why the bear was separated from its mother prematurely,” ODFW’s statement said, adding that the agency “has received no reports of a dead sow in the area.”

“We have no reports of damage associated with this bear, so it’s likely the young bear just got confused and wandered into town,” said Andrew Walch, ODFW Deschutes district wildlife biologist.

ODFW had tranquilized the bear earlier Wednesday after being alerted by the Bend Police Department. The bear had wandered into the 62000 block of Boyd Acres Road and was also seen Tuesday afternoon and evening around NE 18th Street and Cooley Road.

“We are glad we were able to get this young bear back to the wild and thank the Bend Police Department for their assistance and the public for alerting us to the bear,” continued Walch. “The young bear is in good physical condition, which should increase its survival chances.”

Bears are feeding on a variety of plants, nuts, seeds, and berries at this time of year. The bear was released into what biologists considered good bear habitat, which should also improve the chances for a successful outcome for this animal.

Police were called around 11:35 a.m. Wednesday to the city facility in the 62000 block of Boyd Acres Road on a report of a black bear cub in the area, police Communications Manager Sheila Miller said.

Police located the bear in the compound and contacted ODFW. The agency responded to the scene and used a tranquilizer dart to safely take the bear into custody.

Police got several calls between about 4:30 and 7 p.m. Tuesday from members of the public who spotted the bear, while several others flagged down officers to report sightings, Miller said earlier

Bend police and the ODFW responded and found tracks, but did not locate the bear, she said.

“With school back in session and many people walking and traveling through the area, Bend Police asks the public to be aware,” Miller wrote.

If you see a black bear in the area, you’re asked to call Deschutes County non-emergency dispatch at 541-693-6911.

“Do not approach the bear,” Miller said, adding that police work closely with ODFW, which specializes in handling this type of wildlife.

Another bear sighting occurred last week in the Powell Butte area and a Medford woman was attacked by a bear in her backyard Monday night. That bear was killed Tuesday night.

The post Young black bear seen in NE Bend, tranquilized by ODFW at city facility to be released in forest appeared first on KTVZ.