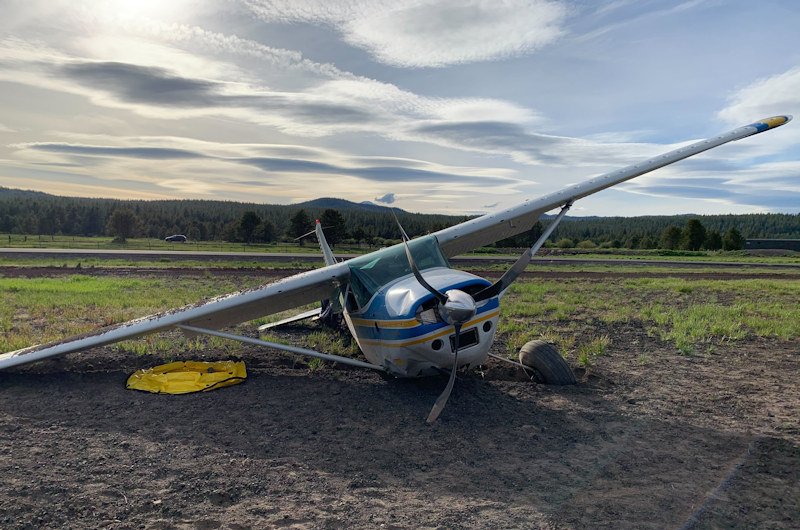 (Update: NTSB confirms crash occurred while plane was taking off)

SUNRIVER, Ore. (KTVZ) – Two people escaped injury when their small plane veered off the runway and crashed while taking off Wednesday evening at the Sunriver Airport, authorities said.

The crash of the single-engine Cessna was reported around 5:10 p.m., Sunriver Police Sgt. Stephen Lopez told NewsChannel 21 at the scene.

A Federal Aviation Administration representative said Thursday the single-engine Cessna 185 Skywagon veered off the runway at Sunriver Airport, with two people aboard, on a flight to Hillsboro.

Sgt. Stephen Lopez said the pilot and airport officials said it occurred while the plane was taking off, and the National Transportation Safety Board concurred.

According to statements from a witness and the pilot and co-pilot, they lost control due to a gust of wind during takeoff and came to rest about 20 feet off the runway.

Police and Sunriver Fire and Rescue arrived and learned the plane’s two occupants were unhurt and declined medical attention, the sergeant said.

Police and firefighters took precautions to avoid any potential danger from the crash, as a small fuel leak occurred.

“Fuel can be a concern,” Lopez said. “Again, it’s the fumes from the fuel can be nauseous, can be a hazardous material and/or a fire hazard. So any time there’s anything, any kind of vehicle collision and-or aircraft crash in this case, those precautions must be taken.”

The resort community’s first responders also notified the FAA and the National Transportation Safety Board, which investigates aircraft incidents.

The airport’s runway was closed until the significantly damaged plane could be moved to a safe location. It reopened at 7:20 p.m., Lopez said.