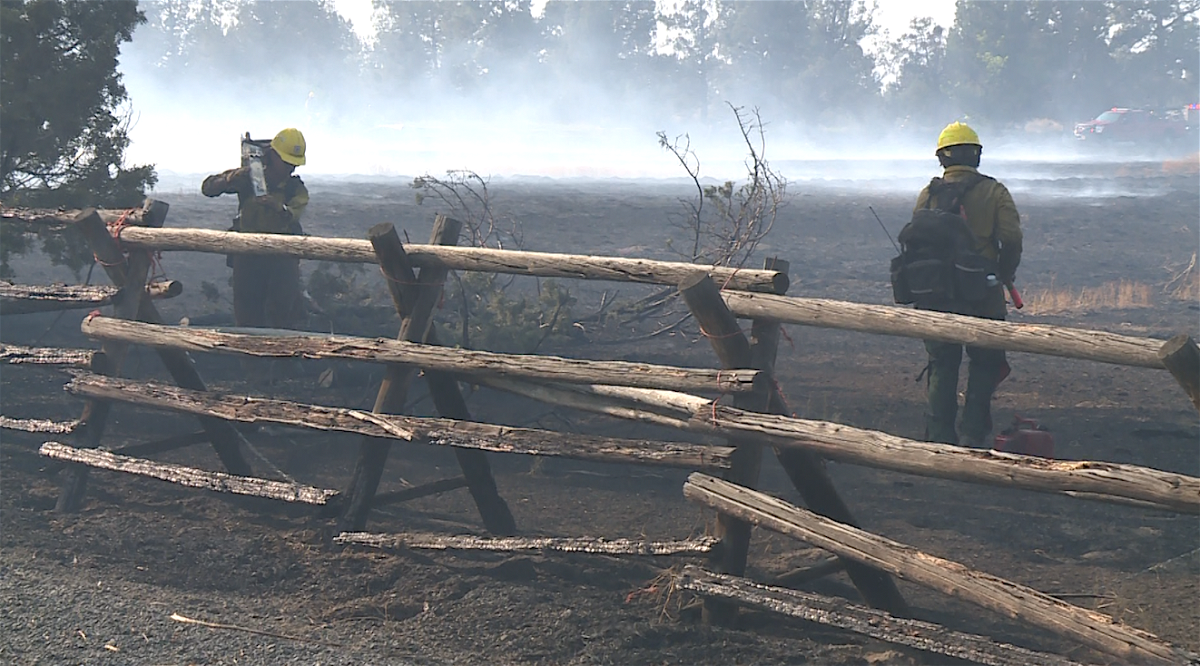 REDMOND, Ore. (KTVZ) – Numerous firefighters from several agencies, including three structure-protection task forces, rushed to tackle a wildfire that broke out Wednesday afternoon off Southwest Obsidian Avenue west of Redmond, prompting evacuations in the area before it was stopped.

The fire was reported around 2:50 p.m. in the 4800 block of Southwest Obsidian Avenue. It was reported to be a fast-moving fire, threatening a barn.

Responding crews saw a large smoke column as they rushed to the scene, Redmond Fire Marshal Tom Mooney said. Due to the winds and high temperatures, the incident commander called in numerous resources, and crews were able to protect numerous homes, he said.

That led to the call-out of three structure-protection task forces involving 11 fire agencies across the region.

Within an hour, roadblocks had been erected and people were leaving the area.

“This is pretty crazy, but this year it’s been pretty mild,” Bend resident Ashley Christensen said. “So that’s a plus. But yeah, it is kind of scary that there is one so close to town.”

Ronda Wilson, a Redmond resident, said, “I’m surprised it hasn’t happened a lot earlier. I mean, as dry as everything has been this year. As a state, we’ve been very fortunate.”

Around 4:40 p.m., the sheriff’s office said there also was a Level 1 “Get Ready” pre-evacuation alert for the area west of Helmholtz, south of Obsidian Avenue and east of 55th Place, following the Central Oregon Irrigation District ditch, south to Helmholtz and Wickiup Avenue.

The sheriff’s office provided an update just after 6 p.m., advising evacuation levels were down to Level 1 for all areas, except four properties on Obsidian Avenue that were still at Level 3.

Highland Baptist Church was set up as a temporary evacuation point. For updated info, go to http://www.deschutes.org/emergency.

Oregon Department of Forestry spokeswoman Christie Shaw said forward progress of the fire had been stopped by 4:30 p.m. and it was reported to have burned about 10 acres.

Mooney told NewsChannel 21 on scene that those told to leave were urged not to even pack a bag but to get out now and go to a friend’s or family member’s homes.

Four outbuildings were damaged by the fire, but no homes were lost or injuries reported.

The fire broke out in a field, but the specific cause could not be determined, Mooney said Thursday.

Shaw said two ODF and two BLM engine crews were called to the scene, along with a 20-person initial attack crew. They assisted Redmond firefighters and task-force agencies from as far away as Sunriver, Alfalfa and Crook County.