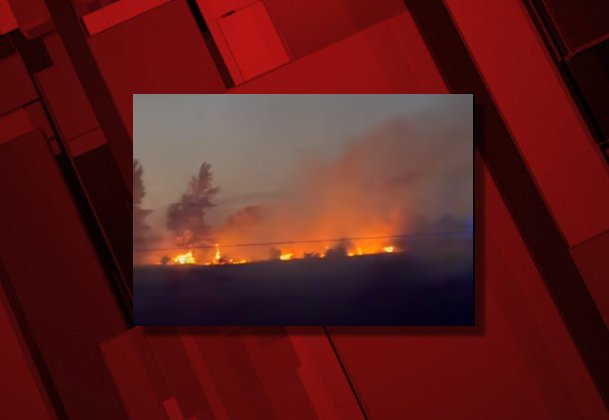 About 123 personnel were on the fire Wednesday, including a half-dozen task forces from across the state. The cause of the fire was under investigation.

This is a wind-driven fire. The fire is burning in heavy dry fuels
including grass, shrubs and juniper. The crews are currently
evaluating snags along the perimeter of the fire and along Hwy 216.
The primary focus is protecting structures and attacking the east
and south flank.

As of this update, Hwy 216 is now open to traffic. We encourage
the public to be mindful of increased heavy fire equipment in the
area.

Dry conditions will persist today and this evening. Temperatures will
range between 94-97, with low humidity; west winds 8-15 mph with
gusts of 22-mph. Minimal relative humidity recovery overnight.
An evacuation shelter has been established at the Dufur High
School, 802 NE 5th Street.

SALEM, Ore. (KTVZ) — Gov. Kate Brown late Tuesday invoked the Emergency Conflagration Act in response to the Miller Road/Dodge Fire burning near the community of Juniper Flats in Wasco County. The fire sparked Tuesday afternoon and is burning grass, brush, and juniper; it was estimated Wednesday morning at 2,000 acres in size.

The Wasco County Sheriff has issued Level 2 and Level 3 evacuation orders for homes near the fire, including a Level 2 “Get Set” alert for Tygh Valley.

ODOT said Oregon Highway 216 was closed Tuesday from the junction with U.S. 197 to Pine Grove (milepost 26-13) due to the wildfire and urged motorists to use an alternate route; the highway was open again Wednesday morning.

Local and mutual aid resources are on scene working to slow the fire’s progress, and a Lane County task force, which was pre-positioned in Deschutes County, is headed to the fire.

“I have invoked the Emergency Conflagration Act to make more state resources available to the fire crews on the front lines in Wasco County at the Miller Road/Dodge Fire,” said Governor Brown. “With many fires actively burning across the state and several weeks of peak fire season ahead of us, I am urging all Oregonians to be prepared and do their part to help prevent wildfires — just one spark can light a fire that will quickly spread. Please continue to follow local and statewide fire prevention regulations and share what you know with others. Every fire we prevent helps us keep our communities and firefighters safe, and our natural resources protected.”

In accordance with ORS 476.510-476.610, Governor Brown determined that a threat to life, safety, and property exists due to the fire, and the threat exceeds the firefighting capabilities of local firefighting personnel and equipment. The Governor’s declaration cleared the way for the State Fire Marshal to mobilize firefighters and equipment to assist local resources battling the fire and further support a coordinated response.

Additional updates for the incident may be accessed at:

Information on wildfire prevention and preparedness may be accessed at: