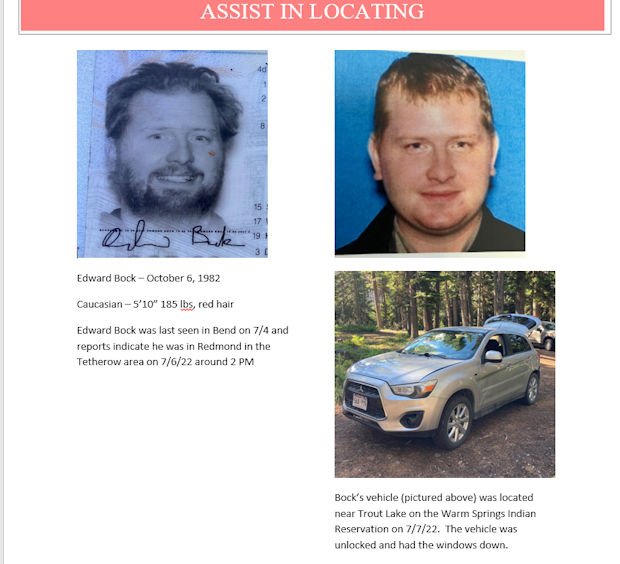 WARM SPRINGS, Ore. (KTVZ) – Warm Springs Tribal Police said Tuesday they are seeking the public’s help in finding a missing Wisconsin man whose SUV was found parked and apparently abandoned at a campground on the west side of the reservation.

Around 8 p.m. last Thursday night, police found the silver 2015 Mitsubishi Outlander Sport with Wisconsin license plate 564YYR at the Trout Lake Campground, Lt. Ron Gregory said. It was unlocked and the doors were open, but the SUV appeared to be abandoned.

After a brief search, tribal police found a wallet and ID in the car and determined it was associated with Edward Andrew Bock, 39, of Madison, Wisconsin, Gregory said.

Bock’s family has been contacted and expressed concern for his well-being, saying he has not been in contact with his family for several days, the lieutenant said.

Tribal police are actively searching for any clues to Bock’s whereabouts, Gregory said. They have tried to contact Bock by text and phone, with no response, and have begun the process of determining the location of his cell phone. Gregory said the last known location for Bock’s phone was in the Tetherow area of northwest Redmond.

Anyone with information on Edward Bock’s whereabouts is asked to contact Warm Springs Tribal Police at 541-553-1171.