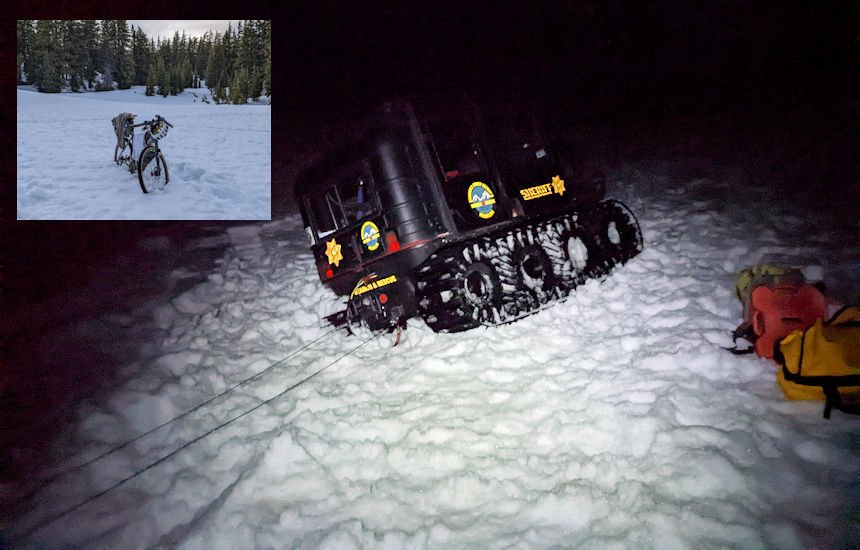 County 911 dispatchers got a call shortly after 5 p.m. from the 56-year-old man who said he’d encountered the cougar while riding on Forest Service Road 370, according to Deputy Donny Patterson, assistant SAR coordinator.

The rider said he left the trail, which was covered in deep, soft snow, to avoid the mountain lion, but became disoriented and could not again find the trail. He asked for help from SAR, saying he was exhausted and did not feel he could find his way back out to the trail, Patterson said.

Two SAR volunteers responded and deployed to the area in a tracked ARGO. They found the rider shortly before 8 p.m. and he was given a ride out of the area – though in the process, the ARGO became stuck in the deep, soft snow and could not be winched out.

Another SAR page was issued for a snowmobile team to help in the rescue, Patterson said, and three volunteers responded. Snowmobiles were brought to Todd Lake and deployed shortly after. After reaching the ARGO team, both groups “worked diligently to free the stuck ARGO,” Patterson wrote in a news release.

Around 2 a.m. Thursday, both SAR teams arrived with the lost subject back to their vehicles and brought him to his vehicle, which was parked at the Cascade Lakes Visitor Center.

Watch for more tonight on NewsChannel 21 at Five.