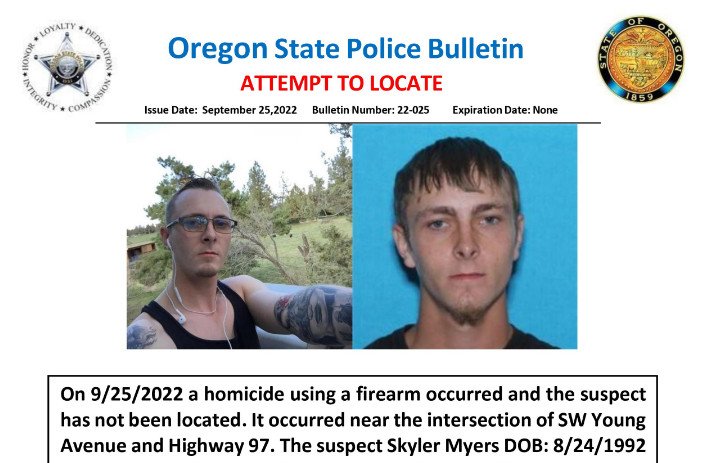 REDMOND, Ore. (KTVZ) – Three hours after alerting the public to be on the lookout for an “armed and dangerous” suspect in a fatal shooting south of Redmond on Sunday, Oregon State Police and Deschutes County sheriff’s deputies said he’s been located “and is of no further interest.”

Deschutes County sheriff’s Sergeant Jayson Janes provided no further details in the brief update issued at 5:15 p.m., other than to say, “Further information on the investigation will come from the Oregon State Police.”

Earlier, OSP issued an “attempt to locate” bulletin that said Skyler Ray Myers, 30, was sought as a suspect in the killing that occurred near the intersection of Southwest Young Avenue and Highway 97.

Myers was said to have short blonde hair with a short reddish beard. He last was seen wearing a dark-colored T-shirt, possibly blue or black, jeans and shoes, and last was seen on foot, troopers said.

“The subject is considered armed and dangerous,” the bulletin warned. “If citizens see this subject, please lock your doors and call 911.”

Online court records indicate Myers had an outstanding arrest warrant for an October 2021 charge of fourth-degree assault, accused of punching another man in the face.

The sheriff’s office issued an alert to area residents Sunday morning to take safety precautions, lock their homes, outbuildings and vehicles and to report anything suspicious.

The sheriff’s office is looking for a man who could be involved in the incident, Janes said. DCSO asked area residents to contact the agency if they see anything suspicious and to take safety precautions.

An area resident told NewsChannel 21 she received an alert to watch for a possible murder suspect, a white male with black hair and a goatee, and warned not to approach him but call authorities if seen.

The post Update: DCSO says Redmond man earlier named as suspect in fatal shooting has been found, ‘no longer of interest’ appeared first on KTVZ.