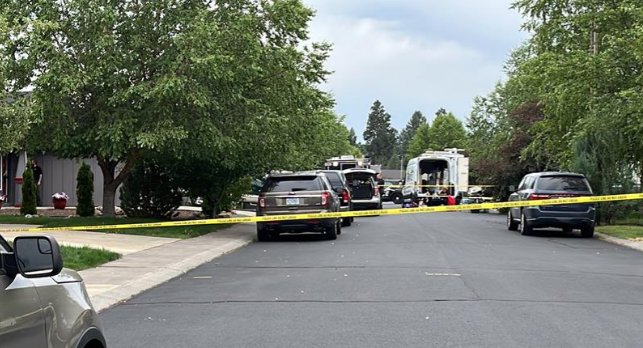 All three had been doing work around home where suspect also stayed at times; bodies found in garage

Police were called around 11:15 p.m. Wednesday to a home in the 20000 block of Mount Faith Place where a homeowner reported having found a person’s body in the garage, Communications Manager Sheila Miller said. Police arrived, confirmed the discovery and secured the scene until the arrival of detectives, who found the second body.

An initial investigation found that on Tuesday, Wesley Abel Brady, 41, and alleged victims Angela Alexus Pastorino and Alfredo P. Hernandez, ere doing work around the home for the homeowner, Miller said, adding that Brady also lived at the home at times.

Later that evening, Miller said, Brady, the teens and the homeowner were drinking alcohol at the home when Brady and Hernandez got into a physical fight, “and Brady murdered both Pastorino and Hernandez.”

Brady allegedly put both teens’ bodies in the home’s garage before eventually traveling to a property he owns in Christmas Valley.

While police were at the home, Brady returned and arrived in the area and was detained. He was arrested and taken to the Deschutes County Jail, where he was held without bail on one count each of aggravated murder, murder, strangulation first-degree sodomy, first-degree sex abuse, first-degree abuse of a corpse and tampering with evidence.

The police spokeswoman said the cause of death for both teens is still being investigated, with autopsies planned.

Miller said everyone involved knew each other and she did not know if Brady and the alleged victims were being paid for their work at the home.

She said she could not release details regarding the homeowner at this time, calling it a “complex crime” with the two locations being processed for evidence.

A Facebook posting before Pastorino and Houser were found included a photo of them together and asked people to help find them. The poster wrote that they had been walking home off Mountain Faith Place but “never made it. Her phone was found in a bush and her dog was found in the road, circling around.”

A few residents said they did not know who lived at the home. One said he saw eight police cars on the street and a man being brought to one of them. Another neighbor said the home’s residents keep to themselves.

Another nearby resident said: “This is the ‘Faith, Hope and Charity’ streets. These things shouldn’t be happening. What is going on in this neighborhood?”

In 2018, Brady was arrested on first-degree arson and burglary charges, accused of breaking into and setting several fires in the basement of the historic Thomas McCann home in downtown Bend and taking several items from the home.

He later pleaded no contest to first-degree arson and first-degree burglary, receiving the maximum five years’ probation, with other conditions, including continuing mental health treatment and not owning animals while on probation.

Kelsey McGee is on the scene and gathering information for a report on NewsChannel 21 at Five.