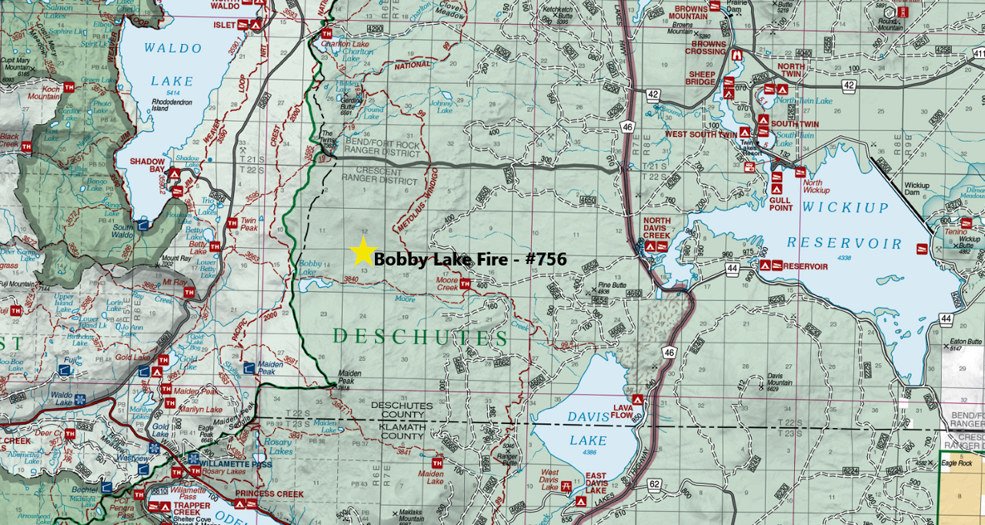 Several aerial resources responded, including air attack, air tankers, helicopters and rappellers. As of 8:30 p.m., the fire had grown to about eight acres, but firefighters on-scene reported that fire activity had decreased and the fire was primarily creeping and smoldering.

Air tankers were successful in getting retardant around the perimeter of the Bobby Lake Fire before dark. The fire was staffed with 12 rappellers, who planned to remain on-scene overnight. Three additional crews and a load of smokejumpers were on order and will arrive Tuesday. A dedicated Type 1 helicopter will be available from the Crescent Airstrip, Olle said.

Just before 6 p.m., Incident #758 was reported in the Mount Thielsen Wilderness, about a half-mile northeast of Miller Mountain. The fire was estimated at a quarter of an acre, burning on a steep slope in heavy timber. Incident #758 was staffed by nightfallwith six smokejumpers who will remain on-scene through the night, Olle said.

The cause of both fires was under investigation, she added.