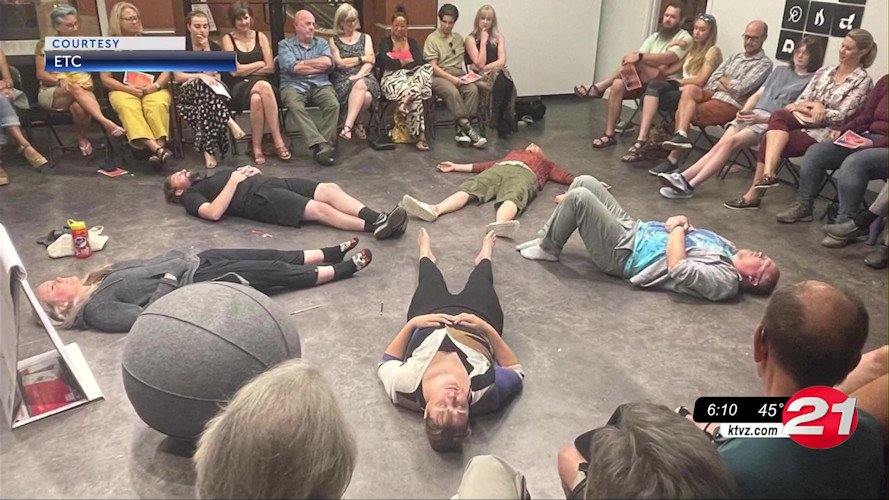 Both groups seeking to create conversation and greater social awareness

BEND, Ore. (KTVZ) — Two new local theater companies — The Deschutes Theatre Company and Ellipse Theatre Community — are working to create a unique footprint for themselves in the Central Oregon community.

“There is a hunger, there is a desire for live performance,” Deschutes Theatre Company actor Todd Tolces said Wednesday.

In light of their mission, The Deschutes Theatre Company, founded just last month, will be performing “Native Gardens,” written by Karen Zacarias at Open Space Studios in Bend on Friday, Nov. 4 at 7:30 p.m. and Saturday, Nov. 5 at 2 p.m. and 7:30 p.m.

As part of the event, attendees will have the chance to see some art and grab a meal from a food truck.

Ellipse Theatre Community, an immersive theatre which started up in 2020, is preparing to perform their next production, “Craig Fox Had a Wife,” written by Beverly Allen, at Open Space Studios. The play illuminates the struggles of PTSD many veterans face. The performances begin on Friday, Nov. 11 and end on Saturday, Nov. 19.

“The play is kind of the anchor or the centerpiece, but we are actually doing two weeks of events, all around discussing PTSD and the impacts of war,” Ellipse Theatre Community Play Director Debbie Levin said.

That means a panel discussion, veterans sharing their stories, and an art exhibit related to war themes.

A Marine combat veteran facing PTSD is portrayed by actor Aaron Rasheed, who is balancing four different roles in the play. He explained the duality in playing the role of a chief warrant officer.

“My character does have those moments where he has to look into himself and think about the emotional side of it, and be human, be humanistic — and at the same time, he realizes there’s a job that has to be done,” Rasheed said.

Unlike the traditional style of performance, the Ellipse Theatre Community offers road shows, or small mobile productions across Central Oregon.

Also in a non-traditional fashion, The Deschutes Theatre Company will be acting out their performance as a theatre-in-the-round, where the audience surrounds the stage. Sue Salas, founder of The DTC, said Native Gardens highlights the serious nature behind stereotypes, while still holding onto a strong comedic element.

Both companies hope to drive more conversation and understanding through their play performances.

“You know, seeing it from the other side,” Salas said.