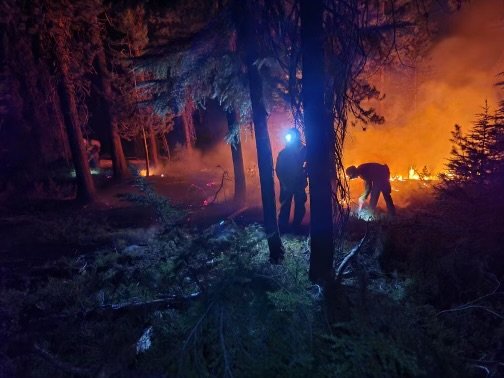 Several aerial resources responded, including air attack, air tankers, helicopters and rappellers. As of 8:30 p.m., the fire had grown to about eight acres, but firefighters on-scene reported that fire activity had decreased and the fire was primarily creeping and smoldering.

Air tankers were successful in getting retardant around the perimeter of the Bobby Lake Fire before dark. The fire was staffed with 12 rappellers, who remained on-scene overnight.

The fire was held at 9 1/2 acres on Tuesday, with 51 personnel assigned to it. Crews built more handline around the fire Tuesday and used bucket drops to cool hotspots. Three more crews arrived Tuesday morning to continue handline construction.

Just before 6 p.m. Monday, Incident #758 was reported in the Mount Thielsen Wilderness, about a half-mile northeast of Miller Mountain. The fire was initially estimated at a quarter of an acre, burning on a steep slope in heavy timber. Incident #758 was staffed by nightfall, with six smokejumpers who remained on-scene through the night, Olle said.

Smokejumpers completed handline around the fire Monday night and finished containment of the half-acre fire Tuesday.

No new fire starts were reported Tuesday, through a fairly slim threat of more thunderstorms amid extreme heat returns Wednesday.

Meanwhile, the Cedar Creek Fire on the Willamette National Forest remains at zero containment and has grown to 4,657 acres as of Tuesday morning. Crews doing fuel break and other preparations have also wrapped fire-resistant aluminum foil around the Taylor Burns Guard Station until the threat of fire passes.