Two La Pine firefighters injured rescuing 2 cats from burning home; up to a dozen others may have perished 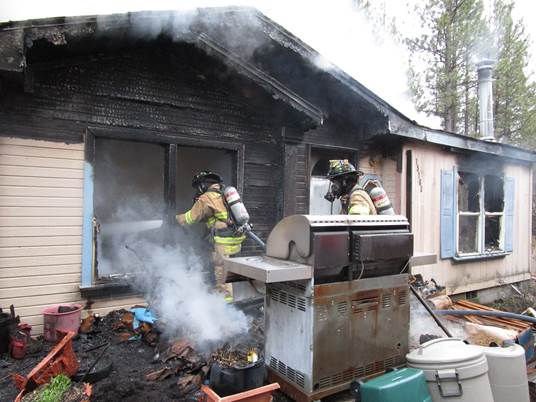 Occupant escapes through bedroom window; cause under investigation

La PINE, Ore. (KTVZ) – An occupant escaped a La Pine house fire through a bedroom window Wednesday evening, but two firefighters were injured rescuing two of what may have been up to 14 cats in the destroyed home, Fire Chief Mike Supkis said Thursday.

Crews arrived to find flames coming from several windows of the manufactured home, while the lightweight truss roof had collapsed and the home could not be safely entered, so a defensive attack took place, the fire chief said.

“Firefighters were able to reach through windows and rescue two cats,“ Supkis said. “However, the fate of the others are currently unknown and due to the significant damage are believed to have perished in the fire.”

The occupant was evaluated and treated on scene by fire medics, and the American Red Cross is providing disaster assistance, the fire chief said.

Crews were able to protect nearby exposures and vehicles while keeping the fire from spreading into the wildland, Supkis said. The home is considered a total loss, and an investigation into the fire’s cause is underway.

The post Two La Pine firefighters injured rescuing 2 cats from burning home; up to a dozen others may have perished appeared first on KTVZ.