Three suspects, car sought in brazen theft of $20K worth of high-end sunglasses from Bend store 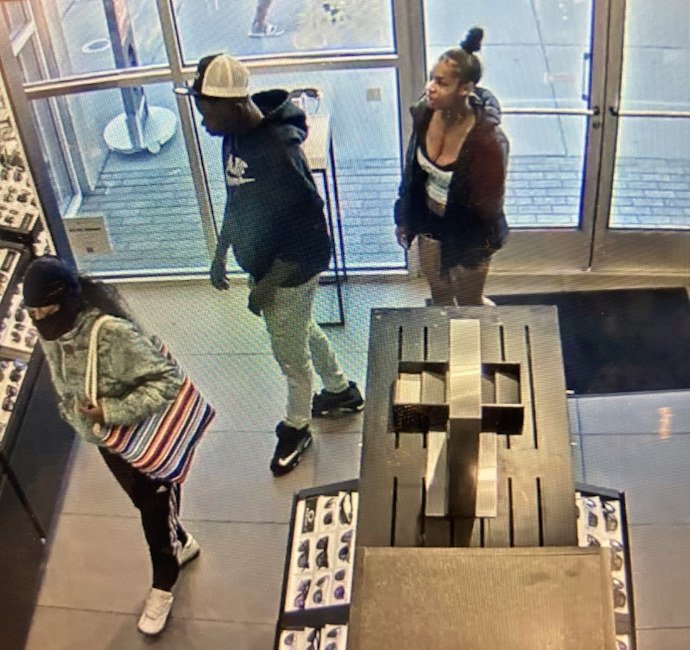 BEND, Ore. (KTVZ) – Bend police released security photos and sought the public’s help Sunday in finding three suspects in the theft of an estimated $20,000 worth of high-end sunglasses from a store in the Old Mill District.

Police were dispatched around 11 a.m. to the report of a possible robbery at the Sunglass Hut on Southwest Powerhouse Drive, Patrol Lieutenant Mike Landolt said.

An investigation found it was instead an aggravated theft of several pairs of high-end sunglasses, Landolt said.

A man and two women entered the store and began taking pairs of sunglasses off the shelves and putting them in bags, he said. A store worker confronted the subjects, who continued taking glasses, with other customers also in the store.

The three left with sunglasses worth an estimated total of $20,000, Landolt said.

Several security photos of the suspects were released by police, and Landolt said they also were able to get a photo of their car: a gray Hyundai, possibly a Sonata, with tinted windows. The car had no license plates when they left, and damage to the driver’s side of the car was evident.

Anyone who sees the car or the people in the photos is asked to contact Bend Police through non-emergency dispatch at 541-693-6911.

The post Three suspects, car sought in brazen theft of $20K worth of high-end sunglasses from Bend store appeared first on KTVZ.