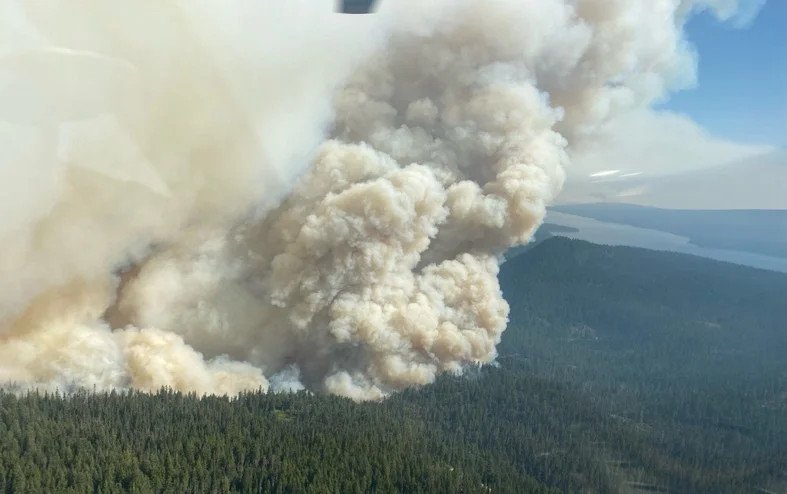 “All containment objectives for the Cedar Creek Fire have been achieved,” the final update (at least for now) stated, noting that steep terrain on the northern part of the fire is not included in the containment figure. Fewer than 50 people remain assigned to the fire, primarily for repair work and removal of any remaining equipment.

As of last Friday, the cost of fighting the blaze had reached about $134 million.

This will be the last Cedar Creek Fire Update unless conditions change.

Over the weekend, crews worked on portions of the forest including dozer lines, handlines, and culverts that were impacted during fire operations. Repair work included the removal of debris from culverts and strategically placing foliage, such as logs and branches, across the affected areas. The placement of materials allows the forest to begin the process of returning to its natural state.

Crews worked to remove any remaining equipment, markings, trash, and ribbons used during operations while patrolling the perimeter to ensure any remaining hot spots did not flare up when temperatures rose into the 50’s.  Crews observed very light smoldering in a few isolated locations, which demonstrates the positive effect rainfall is having across the fire ground. Continuing precipitation will further reduce any residual heat across the landscape.

The objectives for containment include the fire perimeter closest to the Oakridge and Westfir communities, the Highway 58 corridor and other important values. The steep terrain located in the northern portions of the fire which extend into the Willamette National Forest are not included in this percentage of containment.

Weather:  Rain fell across the fire area Monday night and is forecasted to continue throughout today into Wednesday. Additional precipitation and snow is expected this week, with the extended forecast calling for a more typical winter weather pattern to continue.

Closures: Some closures remain in effect on both the Deschutes National Forest and Willamette National Forest. These closures will remain in place until areas impacted by the fire are surveyed for safety risks and crews are able to mitigate these hazards. Please respect Forest closures for firefighter and public safety.