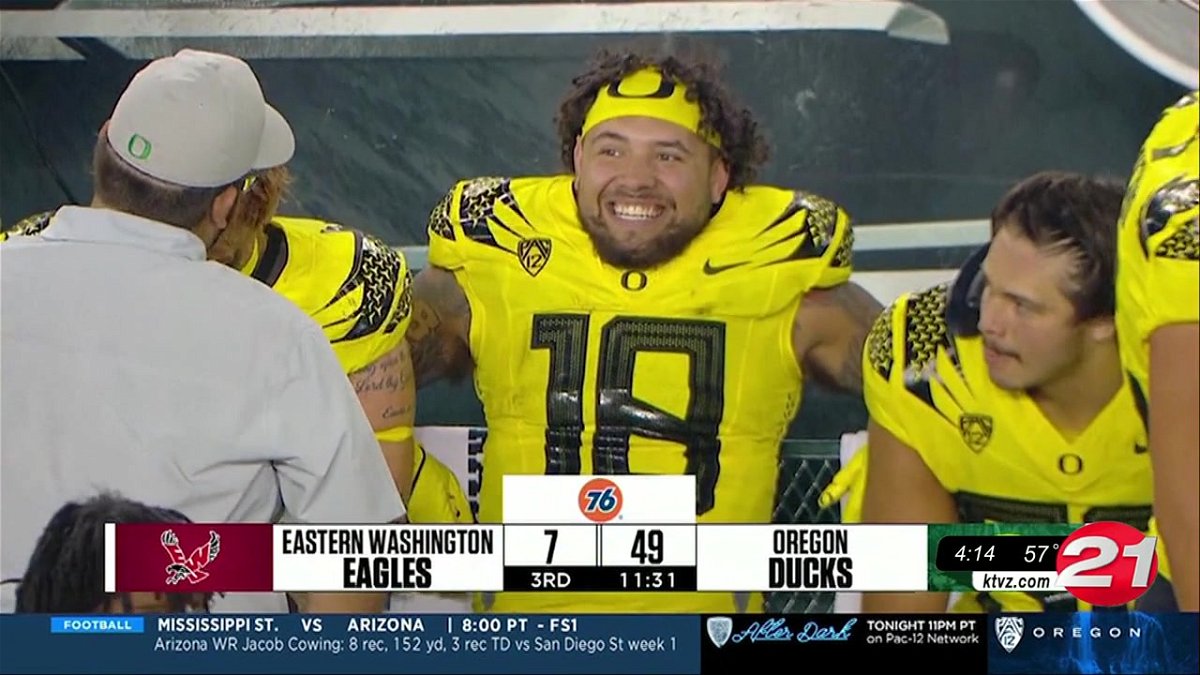 “I felt his energy,” McCormick said Friday. “I felt him celebrating with me, like he was right there cheering me on, happy for me. So it was an unforgettable moment.”

The 22-year old Webb died in July, after falling near an Oregon rockslide.

“We had overcome so much, Spencer and I, and I felt it would only be right if I could honor him and wear his number for this week’s game,” McCormick said.

McCormick has fought personal battles of his own, overcoming numerous injuries in his seven years as an Oregon Duck.

“He’s like the guy who never quits,” Debra said. “I don’t know, he just has so much tenacity and resiliency. I’m in awe of him.”

Cam’s mom was in the stands, nervously watching the replay, holding on to the Spencer Webb bracelet she wears on her wrist, talking to him in her mind.

“Please Spencer, be there for your friend. You guys always said you’d have each other’s backs — have his back,” Debra said, recalling the moment. “Then they ruled it a touchdown. (The ref’s announcement: “The ruling on the field stands.”

“It was a joyous moment,” Debra said.

McCormick’s second career touchdown, of course, had its complications.

“When I got in the end zone, I stood up and I thought like, ‘Where’s the ball at?’ That was definitely the first thing to cross my mind,” McCormick said.

But once it was confirmed, his teammates’ personal greetings and celebrations proved why it meant more than football.

“That’s an awesome feeling, to see all your teammates know, like all the hard work that I’ve put in and what I’ve been through — for them just to be celebrating with me and be so happy, like it was an amazing feeling,” McCormick said.

McCormick said he and the tight end group says a prayer for Spencer every game, and he wants to keep making him proud this season.

But Cam’s mom knows this touchdown, in this fashion, is only going to push him further.

“He wants more,” Debra said. “There’s nothing like scoring in Autzen. This is why you’re playing, right? To help your team. So I think it’s just going to add fuel to his fire and continue to motivate him to excel and do well.”