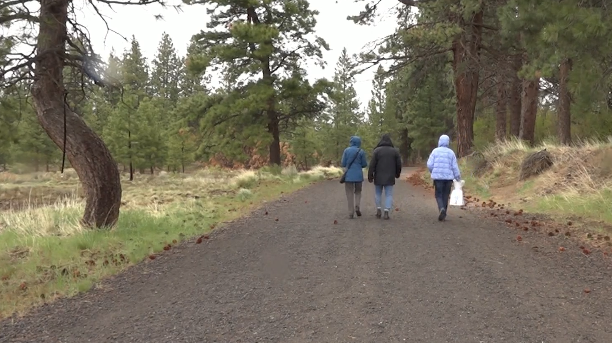 (Update: Adding video and comments from representative and Bend Park and Rec)

BEND, Ore. (KTVZ)– Southern Bend residents represented by several neighborhood associations say they fear they may lose the use of land they enjoy — the Deschutes South Canyon — to another housing development, and hope it can become a park instead, through public funding or donations.

It’s Bend’s largest remaining open green space by the river. People use the area for recreational use- walking, biking, and running, among other outdoor activities.

The group launched a Save Bend Green Space group and website, saying the land is very popular for recreational uses and many people in the community want to keep it that way. The community hopes it can be made into a new park, similar to Shevlin Park.

The Central Oregon Irrigation District has been planning for a few years to sell about 80 acres of its property south of the Old Mill District to Pahlisch Homes of Bend, reportedly for $10 million, though some final land-use steps are needed.

It’s part of COID’s roughly 140-acre property, bounded by the river and Brookswood Boulevard. They would keep the rest of the land, which includes a piped canal and power station

Several neighborhood associations, including Southwest Bend, Southern Crossing and Century West, are coming together in hopes of preserving the undeveloped land, and have also begun an online survey that will close on May 31.

The survey asks people how they use the land and how often. It also asks if the respondents would support a bond measure, or be willing to donate to save the 80 acres from development.

I spoke with Bend Park and Rec Board member Ariel Mendez about whether the effort could work.

“I really welcome resident input and the effort to try and organize people, to try and figure out how are people using this open space,” Mendez said Thursday.

“I think that’s all really useful information,” he said, but “it doesn’t necessarily change the fundamental opportunity of having a role to play. in terms of acquiring property or playing a formal role in that sense. So in that sense, we have to wait and see what  the outcome of this private real estate transaction is.”

He said all formal trails that exist along the river, along the canal pipeline and ways to access the property, will be preserved, regardless of what happens to the rest of the property.

Southwest Bend Neighborhood Land Use Chair Judy Clinton said she wants it to become a “green lung” for Bend, rather than more development for more housing.

“More housing is happening all over Bend,” Clinton said. “Can’t we save one place that is just incredible, available to everybody? That’s what we’re trying to do — we’re trying to raise money and be able to buy this.”

After the survey is completed, the group will compile the results and present them to the Bend City Council and Bend Park and Rec Board.

The post SW Bend neighborhood groups band together in bid to ‘save Deschutes South Canyon’ as a park — not housing appeared first on KTVZ.