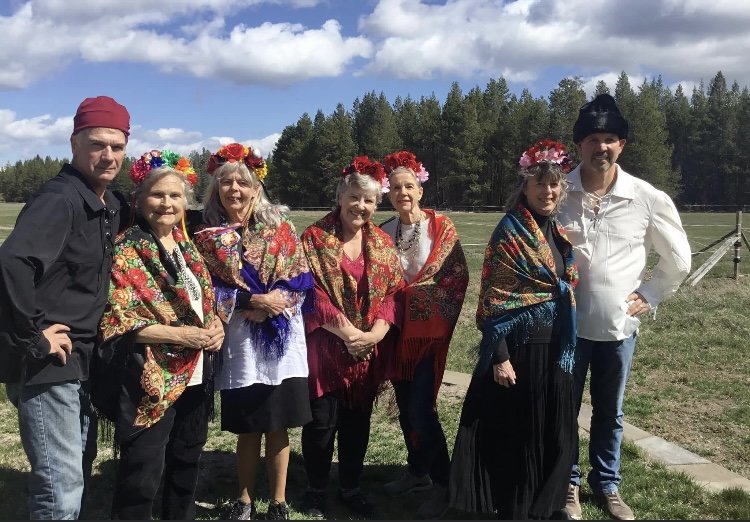 SUNRIVER, Ore. ( KTVZ) — The Sunriver Stars Community Theater is putting on a production later this week that will help feed the people of war-torn Ukraine.

Proceeds from the auction, beverages, dinner and the show itself will be donated to World Central Kitchen. The production is written by Patrick Rainville Dorn called “The Blabbermouth, the Puff Monster, and the Wolf; Topsy-Turvy Tales from Ukraine.”

Tickets are sold out for Friday and Saturday evenings, but as of late Tuesday afternoon there still were 10 tickets remaining for the 1 p.m. Saturday lunch show, there will be no onsite sales for tickets.

“This production is something special – it is not just an evening of entertainment and delicious food,” said Artistic Director Victoria Kristy. “It is a way for all of us, those of us onstage and our guests, to support some of the hundreds of thousands of displaced people of Ukraine. We will be donating the full ticket price and 100% of the silent auction income to World Central Kitchen. A donation of just $50 feeds ten people!”

“We want to feed the people that lost everything- lost their homes and had to become refugees,” Kristy said. ” We want to become part of that wonderful experience of feeding them, so they don’t have to worry at least for that one day- that we’re taking care of them.”

Kristy told NewsChannel 21 people walking on the street have come up to her directly to donate.

I asked Kevin Long, who is playing the wolf, what this production means to him.

“It feels good,” Long said. “I mean, it’s great that we can do something to help out what’s going on in Ukraine. It’s our small part we can do to help out. The play is just a good way to bring some fun and enjoyment, as we’re raising some money for them.”

Here’s the rest of their news release on the production, and the cause:

SSCT is proud to partner with World Central Kitchen, a non-profit providing over 300,000 meals a day to Ukrainian cities. Patrons will also have the opportunity to donate an additional amount when purchasing tickets. Each of the three shows will be limited to 50 seats, so as to provide adequate spacing and service. In addition, there will be a cash bar and sunflower-themed Silent Auction featuring various items from the community, including Ukrainian flag-themed gifts from Lazy Daisy, fresh sunflower arrangements from Wild Poppy Florist, and original artwork and jewelry from local artists. The Stars’ goal is to send $10,000 to WCK.

“I love that members of the Sunriver community have partnered with us on this effort,” Kristy said. “The pastors at The DOOR are once again opening their space and letting us transform it into our black box dinner theater. Thad Lodge, owner of Marcello’s Cucina Italiana, is donating the cost of the food – we are so grateful!”

The play comprises three comedic folk tales from Ukraine, brought to life by a troupe of traveling storytellers.

In “The Blabbermouth,” a clever woodsman devises an ingenious ruse to keep a buried treasure a secret, despite his gossipy wife.  The next story tells of the goofy, cellar-dwelling “Puff Monster,” who bites off more than it can chew. The trio is complete with the classic “Sirko and the Wolf,” in which canine cousins outwit a cranky, noodle-wielding Babushka and make their wildest dreams come true.

Dinner has been graciously donated by Marcello’s and will include garlic bread and salad, fettucine pesto with mushrooms and sundried tomatoes, and Babushka’s mini cupcakes for dessert.

The Stars season will pick up again in the summer with a kids’ drama camp followed by an all-ages production of “Oz!” in the fall. For tickets and more information, please visit www.sunriverstars.org or follow on Facebook.