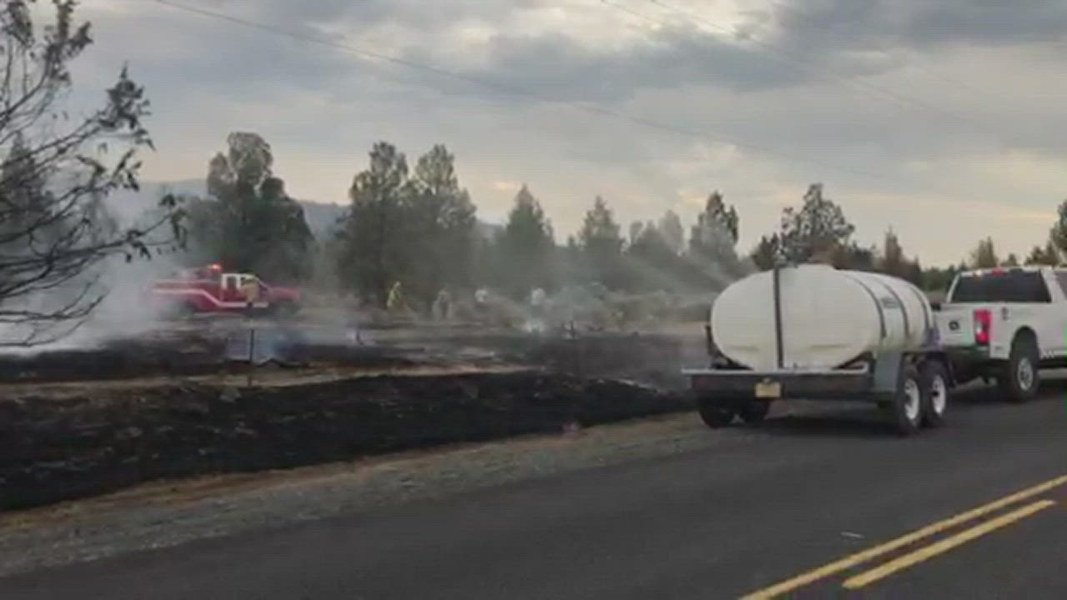 MADRAS, Ore. (KTVZ) – A dangerous combination of extreme heat, strong thunderstorms and winds sparked several fires around Jefferson County late Saturday afternoon, sending fire crews scrambling and prompting call-up of a regional task force as residents helped tackle the flames with all the tools and vehicles at their disposal.

A fifth day of record heat (Redmond Airport hit 108 degrees) coincided with the area’s first big buildup of thunderstorms of the current hot spell, and the National Weather Service in Pendleton issued a Red Flag (fire weather) warning for much of the region for “abundant lightning” and increased fire danger, continuing into Monday.

Just after 6 p.m., Saturday forecasters issued a severe thunderstorm warning for northwest Jefferson County and south-central Wasco County due to a strong thunderstorm over the south part of the Warm Springs Reservation, 15 miles west of Madras, moving northeast at 5 mph with a potential of 70 mph wind gusts and quarter-sized hail.

Just after 5 p.m., a fire apparently sparked by power lines touching in windy conditions ignited at the intersection of Culver Highway and Park Lane, area residents said. Neighbors acted fast, bringing in backhoes, skid steers and water tanks while Jefferson County Fire & EMS was called to the scene, according to resident Sandra Ayres. The fire was out in about a half-hour.

Jefferson County Fire & EMS Chief Jeff Blake said at least four fires were fought — apparently most if noit all sparked not by lightning but wind from the storms causing power lines to touch or transformers to send sparks flying.

“We’ve had three, four storms sort of microburst from these cells going through,” Blake said. “For a time, 30 to 50 mph winds were pushing everything out. All seem to be from power lines or transformers sparking.”

The Culver Highway fire “was the first one, then we picked up several others,” Blake told NewsChannel 21. “Some were small, some were big.”

Another fire burned about two acres off Northeast Henderson Drive and Loucks Road, northeast of Madras, which was in the mop-up stage before nightfall, according to the Jefferson County Sheriff’s Office.

Fire crews as night fell also were finishing up work on a fire that destroyed a 50-by-200-foot hay barn off Gumwood Lane north of Madras, apparently caused by a sparking transformer, and which also spread a bit to the wildland before it was caught, Blake said.

The sheriff’s office said another fire broke out southwest of Culver and the Central Oregon Interagency Dispatch Center was sending crews to help put that one out.

“I feel like we’ve got the upper hand now, got everything contained,” Blake said around 8:30 p.m. “We got great help from the BLM, a private contractor with (water) tenders.”

There were no evacuations, but some nearby residents were notified about one of the fires in case that proved necessary later, Blake said.

“Due to the heat and high winds, if you live in the area of any of these fires, please be ready,” the sheriff’s office advised in a Facebook post Saturday evening. “It is always good to be prepared at a moment’s notice.”