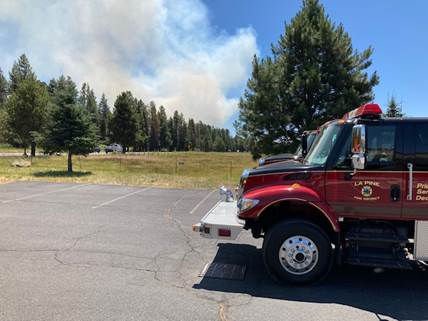 On Tuesday, an excessive heat emergency declaration for 25 counties, including Deschutes, was made by Governor Brown.

Grants were made available under the state’s new wildfire protection measures enacted after the 2020 fires and provide funding for local fire staffing assistance for this wildfire season.

“This supplemental fire staffing is imperative to insure effective initial fire attack and quick mutual aid on wildfires to catch them when they are small,” Supkis said in a news release Wednesday.

In Central Oregon, the fire chief said, “federal, state, and local firefighters have a history of strong cooperation working toward fire-resilient landscapes and communities, along with very effective initial attack on wildfires. This was evident last Friday with the 26-acre Old Wood wildfire in the La Pine – Sunriver area that was quickly stopped.”

The La Pine Fire District will be adding an additional fire crew this week during the state-declared emergency for excessive heat weather conditions. These firefighters will strengthen initial attack on any fires in the district, as well as improve mutual aid responses regionally.