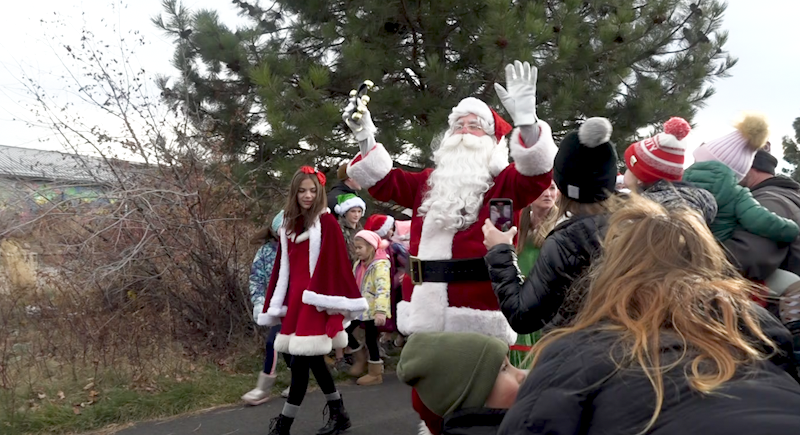 BEND, Ore. (KTVZ) — Santa is making a trip around the globe a bit early this year. The big guy visited Bend’s Old Mill District Friday morning, making a high-flying entrance — by AirLink helicopter, not Rudolph-led sleigh — to the delight of gathered kids and families.

St. Nick had to change out his sleigh for this particular stop, but as always, he came to visit families and to spread some first-round holiday cheer.

“We’re ecstatic to see Santa and host events like this again,” Old Mill Marketing Director Beau Eastes said. “The community is excited that we can start doing things together again. We’ve been partnering with Santa for years, and he’s been flying in, with the help of AirLink.”

After St. Nick landed, children lined up for the Santa parade to see him in person.

“This year, it’s exciting — we added a Santa Parade, which you saw,” Eastes said. “We got some great help from some of the area high school cheer and dance teams. We got this fantastic community march with Santa across the footbridge.”

Children also got to visit Santa in SantaLand — a chance to take a photo with him and tell him their Christmas wishes.

“This is easily one of the biggest crowds we’ve had for Santa,” Eastes added.

I asked Jaden Breon, “What’s on your Christmas list this year?” She said, “Transformers and a remote-controlled car.”

“He gives a lot of people high fives,” she said after thinking about it a bit.

“We got some holiday decor — I got a pillow for the couch and some trees,” Lui said.

Eastes said, “For everybody to come down here and spend their day after Thanksgiving together with friends, families,  strangers to watch Santa, and really get in the Christmas spirit, we’re thrilled we can be a part of that.”

Your family can visit Santa at the Old Mill’s SantaLand until December 18 before he heads back to the North Pole for last-minute travel preparations. SantaLand is between Evoke Winery and Avalon Salon and Spa.

The post St. Nick touches down on the High Desert — by helicopter, not sleigh — to spread holiday cheer appeared first on KTVZ.