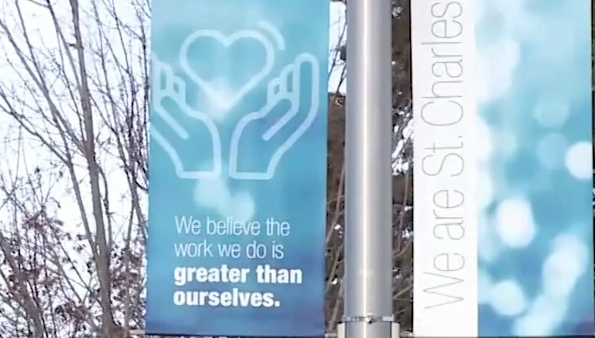 BEND, Ore. (KTVZ) — Nurses at St. Charles are voicing frustration over how the hospital system is handling an ongoing staffing shortage, after it was learned of a recently declared, then withdrawn “crisis standards of care” emergency.

As first reported by OPB, the St. Charles Health System took the unprecedented step of declaring “crisis standards of care” at its four hospitals, the first Oregon health system to do so during the COVID-19 pandemic, according to the Oregon Health Authority.

St. Charles had to rescind the emergency declaration days later, after the OHA said it did not qualify under state guidelines, OPB reported.

After the “crisis” declaration was reported, some nurses reached out to NewsChannel 21, saying they believe it was done so the hospital could violate union contracts and change workloads.

RN Julie Bostrom said Friday, “We’ve been wanting the hospital to come together with us, to try and problem-solve this, for a very long time. I’ve been involved with committees that have worked on this issue for a long time.

“So we feel frustrated that we are not at the table with them, to try to solve this issue of staffing and creating the optimal experience for our patients and our community,” Bostrom said.

“We create a “facility disaster plan” when, according to the Joint commission standard, St. Charles is experiencing an emergency that, due to its complexity, scope, or duration threatens our capabilities and requires outside assistance to sustain patient care, safety, or security functions.

“More generally, OHA’s Crisis Care Tool authorizes hospitals to activate crisis standards of care ‘if their critical care resources are severely limited, the number of patients presenting for critical care exceeds capacity and there is no option to transfer patients to other critical care facilities.’”

Is the crisis affecting patients?

“To be clear, we are not operating under crisis care standards. Our leadership team is, however, having conversations with the nurse staffing committees at our hospitals to discuss the possibility of changing our current nurse staffing plans.

“But we are struggling with the same operational challenges as every other hospital in the state. There are really two issues that are having the most serious impact:

“One, like most other hospitals in the state, we are critically understaffed. As of today, we have 555 open positions, 63 of which are for certified nursing assistants and 156 for registered nurses.

“And two, we are chronically over capacity. Because skilled nursing facilities and inpatient rehab centers are also full, we are unable to discharge many of our patients who are ready for “step-down” care outside of a hospital. That means we often don’t have beds available for patients who need to be admitted, so we have no choice but to “board” them in our Emergency Departments.”

How is it affecting nurses?

“As mentioned above, our leadership team is having conversations with the nurse staffing committees at our hospitals to discuss the possibility of changing our current nurse staffing plans.”

Why weren’t nurses made aware of the decision?

“Some of our nurse leaders are part of our Hospital Incident Command Structure, which was activated to manage our staffing and capacity challenges, and were aware of the decisions being made.”