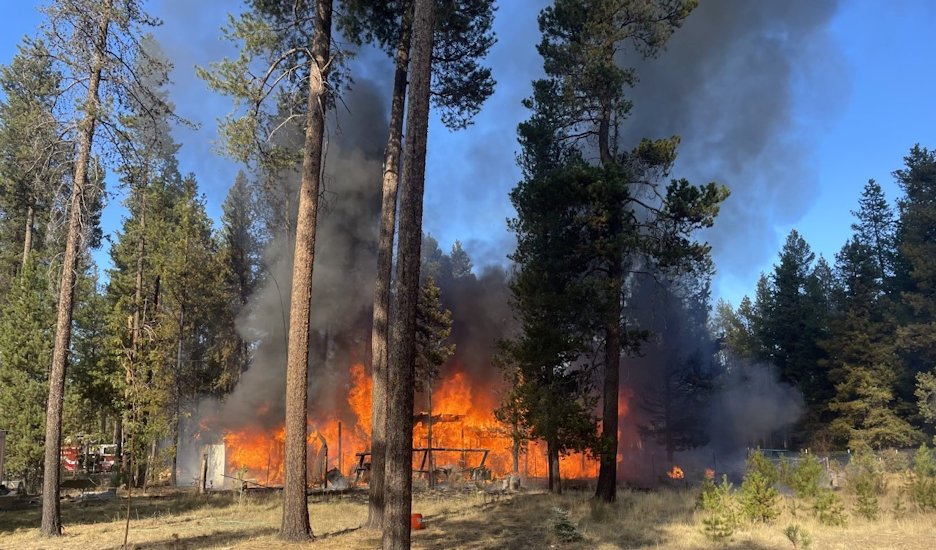 La PINE, Ore. (KTVZ) – A house fire in La Pine Tuesday afternoon threatened to spread to nearby homes and the forest, prompting Level 3 evacuation notices for residents in the immediate area for over an hour, the Deschutes County Sheriff’s Office said.

Several neighbors in the area called 911 dispatchers to report the fire around 2:20 p.m. in the 57000 block of Boundary Road, and the first La Pine Rural Fire Protection District crews to arrive found a house was fully involved. Other agencies, including Sunriver and Cloverdale, sent engine crews to assist.

The evacuation notices were sent by emergency alert to residents between Camino De Oro north to Sparks Drive and from Boundary Road east to Second Street. Sgt. Jayson Janes urged people to avoid the area while crews worked to put out the blaze.

“All evacuation levels are being dropped,” Janes said in a 3:40 p.m. update. “Residents that were evacuated can return to their homes. Some roads will remain closed while fire crews continue working in the area.”

NewsChannel 21 has a crew on scene and we’ll have updates online and in our evening newscasts.