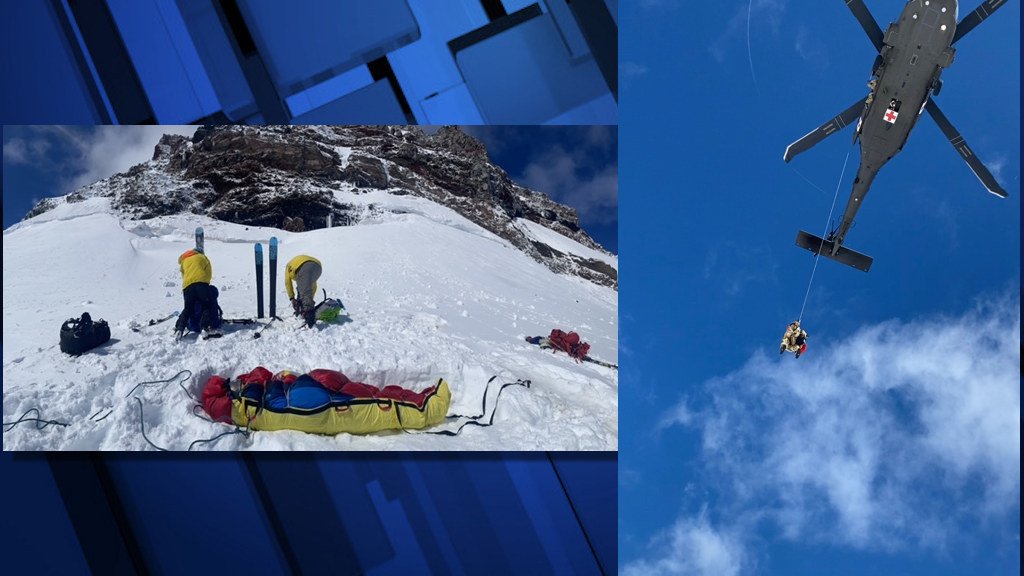 SISTERS, Ore. (KTVZ) – A climber from New York apparently triggered a small avalanche that sent him tumbling down the north side of South Sister on Saturday, prompting a lengthy rescue effort that ended late Sunday morning, when he was hoisted aboard an Oregon Army National Guard Blackhawk helicopter and flown to St. Charles Bend.

Deschutes County 911 got a call shortly before 7 p.m. Saturday from a 23-year-old Ithaca, New York man who said he’d been injured in a fall that left him unable to continue on his own, said Deputy Donny Patterson, assistant coordinator for the Sheriff’s Search and Rescue operation.

The hiker requested the assistance of a helicopter to get off the mountain, Patterson said, but poor weather didn’t allow for a helicopter rescue Saturday evening. Fortunately, the climber had access to a tent and a sleeping bag to secure himself in and await a rescue team.

Sheriff’s Search and Rescue was activated and made plans to send a team to the hiker’s location, at about 9,100 feet elevation on the 10,358-foot-tall peak, Patterson said.

“The time it would take to travel to the location and the need to negotiate avalanche terrain made a daylight rescue the only viable option,” the deputy said in a news release.

The Oregon Office of Emergency Management’s SAR coordinator was contacted to request assistance from an Oregon Army National Guard helicopter Sunday morning, should weather conditions allow a hoist rescue, Patterson said. The National Guard agreed to assist in that rescue.

Around 1 a.m., Deschutes County SAR’s Mountain Rescue Unit left the Pole Creek Trailhead to travel the nearly nine miles to the injured hiker. A contingency SAR team followed up the trail around 6 a.m., in case the weather worsened and a helicopter rescue was not possible, Patterson said.

The first team reached the climber shortly before 9 a.m. and began evaluating his condition and preparing to move him down a glacier, to an area where a helicopter hoist would be safer, away from a vertical cliff, the deputy said.

The Army National Guard helicopter from Salem arrived around 10:40 a.m. and at about 11:30 a.m., the man was hoisted into the helicopter for the trip to the Bend hospital.

“The Deschutes County Sheriff’s Office Search and Rescue would like to thank the Oregon Office of Emergency Management and the Oregon Army National Guard for their assistance in this rescue,” Patterson wrote.