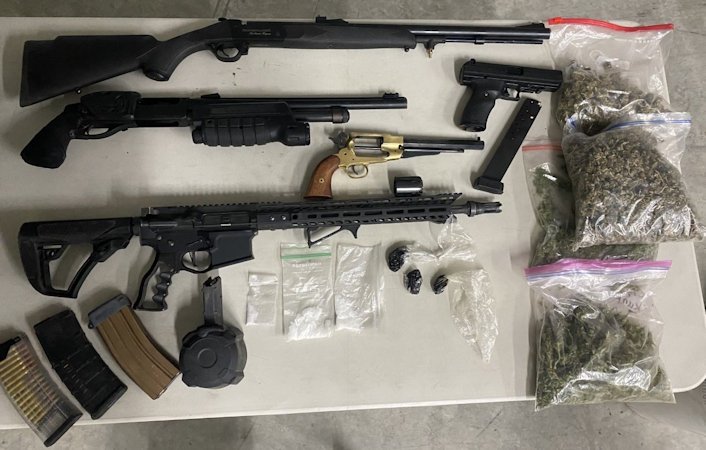 A raid on his nearby home late Wednesday morning led to more evidence and a woman’s arrest, the Deschutes County Sheriff’s Office said in a news release.

On Tuesday, Street Crimes detectives learned the man was returning to the county with possible drugs in his possession, the sergeant said.

Around 6:20 p.m., he was spotted driving a Winnebago motor home on South Century Drive in La Pine and a deputy stopped him near the intersection of Burgess Road.

Sullivan said a search warrant was executed on the motor home and turned up five guns, including an AR-15-style rifle and a stolen 12-gauge shotgun. They also found in his possession commercial quantities of heroin and methamphetamine and more than eight pounds of processed marijuana.

The man was booked into the county jail on drug possession and manufacture charges, as well as five counts of felon in possession of a firearm and a single count of first-degree theft by receiving related to the stolen shotgun.

Around 11:40 a.m. Wednesday, detectives raided the man’s home in the 17000 block of Canvasback Drive. A 29-year-old woman at the home allegedly possessed a criminal amount of meth and was taken into custody without incident, Sullivan said. Detectives also found other evidence of commercial drug offenses during the search warrant execution.

The woman was booked into the Bend jail on charges of frequenting a place where drugs are used, meth possession and three counts of endangering the welfare of a minor.