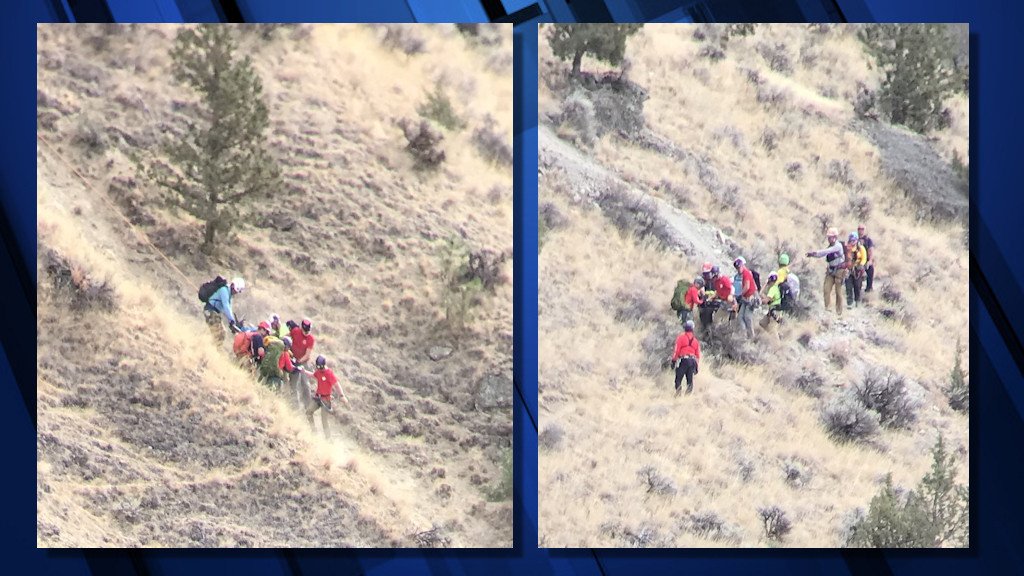 TERREBONNE, Ore. (KTVZ) – A 21-year-old Seattle man setting up a slack line at Smith Rock State Park was injured in a 35- to 50-foot fall Saturday morning, prompting a rescue that took several hours and involved several mountain rescue teams who happened to be training at the park, officials said.

Deschutes County 911 dispatchers got a call shortly after 10 a.m. regarding an injured hiker who had fallen on an unimproved route southwest of Asterisk Pass, said Deputy Aaron Myers, assistant rescue coordinator for Sheriff’s Search and Rescue.

The hiker was scrambling up a rock outcropping to set up the slack line and sustained injuries in the fall that prevented him from making it down to the river trail on his own, Myers said.

As it so happened, Deschutes County SAR was conducting a joint training operation Saturday with several mountain rescue unit (MRU) teams from around Oregon, including two members of the Hood River Crag Rats, seven members of Corvallis Mountain Rescue and nine members of Eugene Mountain Rescue, the deputy said.

Deschutes County SAR’s MRU team was notified and responded to the injured hiker, along with nine SAR volunteers, making contact with the man around 10:45 a.m. The Deschutes County volunteers saw that the man would have to be placed in a litter and lowered from his location about 650 feet down to the river trail, Myers said.

The teams training with SAR helped lower the hiker to the river trail and he was transferred to an ambulance around 2:30 p.m. and taken to St. Charles for further medical evaluation.

“The Deschutes County Sheriff’s Office would like to thank the Hood River Crag Rats, Eugene Mountain Rescue, Corvallis Mountain Rescue and Redmond Fire for their assistance on this call,” Myers said in a news release.