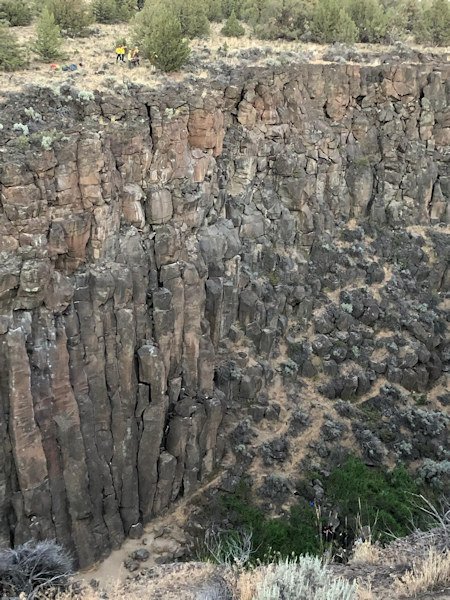 TERREBONNE, Ore. (KTVZ) – A Smith Rock climber injured in a long fall was lifted from the bottom of a 110-foot cliff Monday night in a challenging, five-hour technical rope rescue that involved hoisting the 34-year-old Redmond man in a litter to the top of the cliff and a waiting ambulance, officials said.

Deschutes County 911 dispatchers got a call around 6:40 p.m. regarding the injured climber on a trail below an unimproved climbing spot south of an area known as Student Wall, according to sheriff’s Deputy Kyle Joye, assistant Search and Rescue coordinator.

Joye said the man was reported to be an avid climber, who was about to hook into a rope system when the fall happened. Witnesses said they say the man fall about 50 feet, then roll another 40 feet over several rocks before coming to rest at the base of the cliff. Despite that, the man reportedly suffered non-life-threatening injuries, the deputy said.

With the reporting party’s information, officials decided SAR’s Mountain Rescue Unit technical team would be needed, due to the location at the cliff bottom, and that the best recovery would be to bring the man up the cliff face, Joye said.

A total of 15 SAR volunteers and two Special Services deputies responded, arriving on scene by about 8 p.m., the deputy said.

Redmond Fire & Rescue personnel were able to hike to the patient and made initial contact while the Mountain Rescue Unit set up an extrication system of ropes and a litter to bring him about 110 feet. Joye noted that SAR units accessed the “Burma Road” side of the canyon from private property, with permission of the landowner.

By 10:30 p.m., the man was being hoisted up the cliff face to the waiting ambulance, and he was turned over to Redmond Fire & Rescue shortly after 11 p.m.

Joye said DCSO wanted to thank Redmond Fire & Rescue and the private property owner for their assistance during the difficult and technical mission.