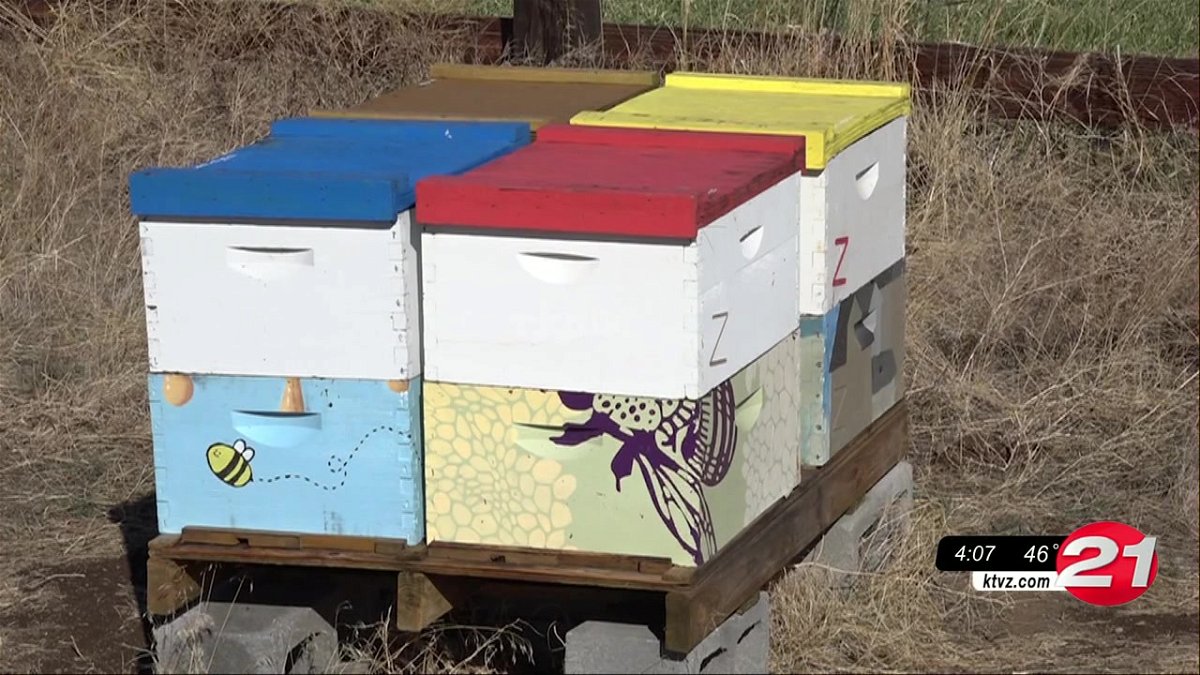 However, as owner John Herman explains, the wine is not made from grapes, but from bees.

“At this place, it will feel like any winery you’ve ever been to, really — just in a funkier, ranch old classic setting,” Herman said Wednesday. “Instead of vineyards, we have pollinator habitats. We have what we call regenerative bee pastures.”

Herman said mead ferments the sugar in flowers, the same way wine does with grapes and beer and whiskey do with grain.

But he said the regenerative pastures that make mead use less water, turn over less ground, integrate livestock and promote native plant life better than other alcohol fermentation farms.

“Mead is by far the most sustainable alcoholic beverage on the planet, and it’s not close,” Herman said. “Mead thrives. Mead is only able to be produced in a system of abundance, out of a healthy system, and it’s the celebration of that healthy system that we want to bring here to this ranch.”

He wants to open a meadery off Highway 20, with indoor and outdoor tasting rooms, a farm store, wine sales, a food cart lot and occasional concerts or events.

“It’s an extension of who we are and who we want to be as people,” Herman said.

The meadery was approved by Deschutes County planners, but Central Oregon LandWatch appealed it.

Herman believes the appeal is just a misunderstanding.

“A challenge that mead makers have all across the world is that people don’t really know what mead is. It’s an ancient form of wine and it hadn’t had much popularity in a couple centuries really,” Herman said.

“Central Oregon LandWatch is committed to preserving our region’s agricultural land and supporting its farm economy. In Deschutes County, opening up our remaining farmland to commercial uses can ultimately harm farming economies by driving up the cost of land and inviting market speculation, which is what Oregon’s land use system was designed to prevent. In this particular instance, we have some concerns with Deschutes County’s decision to approve primarily commercial uses on agricultural land.”

In January, Kristy Sabo, an environmental planner and attorney with LandWatch, raised some issues: “We are initially concerned that the conditional use application for a meadery in conjunction with farm use does not meet all of the applicable criteria/ that the burden of proof is not satisfied for all criteria.”

In its appeal notice, LandWatch claims the county approval “misinterprets and misapplies applicable law,” and that “there is no legal basis for finding a meadery is an allowed use in the EFU (exclusive farm use) zone.

Concerns also were raised about the traffic that may be generated from the nearly 84-acre property, located between highways 20 and 126.

Links to the land-use documents and appeal notice, as well as a Zoom livestream of Wednesday’s 6 p.m. hearing, can be found at the hearings officer agenda.

“We wanted to see if there’s a chance to do a type of farm business that models leaving things better than we find it, in all aspects,” Herman said. “Whether that’s in the field, in the production space, or in the tasting room, in the way we interact with our neighbors and tell them the story of regenerative farming in Central Oregon.”

Herman said he’s gotten letters of support from the High Desert Food and Farm Alliance, the American Mead Makers Association, the OSU Bee Project and other local and national groups.