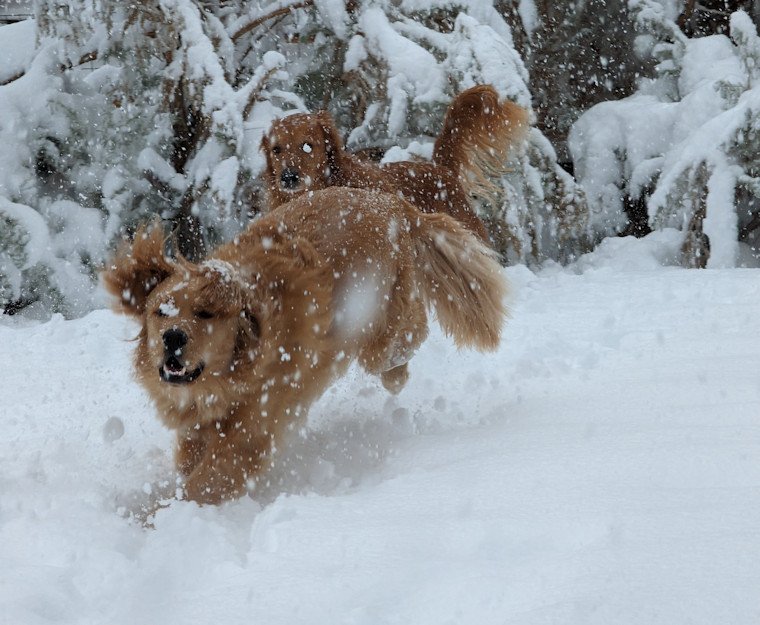 BEND, Ore. (KTVZ) – Several inches of heavy, wet snow blanketed the High Desert Sunday – the deepest, most widespread snowfall in some time – knocking out power to thousands and causing slippery roads that led to slide-offs and jackknifed trucks, but also making for picture-postcard scenery around the region.

The National Weather Service in Pendleton updated around 2 p.m. Sunday its winter storm warning that continues through 10 p.m. for much of Central Oregon (Bend, Redmond, Prineville and Madras), forecasting 1-3 more inches of snow and warning motorists to plan for slippery road conditions.

“Snow, moderate to heavy at times, is expected to continue through the afternoon before tapering off through the evening hours,” forecasters said.

“If you must travel, keep an extra flashlight, food and water in your vehicle in case of an emergency,” the NWS said.

A winter weather advisory also continues until 10 p.m. for another 1-3 inches of snow on the east slopes of the Oregon Cascades, which includes La Pine, Sunriver and Sisters.

Light snow was still falling at 2 p.m. at the Bend, Redmond and Prineville airports but had turned to light rain at Madras Airport, while it had stopped and turned mostly cloudy in Sunriver.

Forecasters said the “significant winter storm” stemmed from a deep upper-level low just off the southwest Oregon coast. The band of moderate to heavy snow made for snow falling from Bend to Madras, and temperatures hovering around freezing.

By noon, a Facebook poster tallied seven inches of snow in southwest Redmond, and another Redmond resident reported they were “going on eight inches (of snow) and no slowing down.” Another Redmond weather spotter reported 7 1/4 inches of snow by late Sunday morning and continuing to fall at about a half-inch an hour. at 2 p.m. came a Facebook report of 10.5 inches at Powell Butte.

A Redmond Community Choir concert scheduled for 4 p.m. at Redmond High School was canceled, an organizer said. (Please contact the newsroom at stories@ktvz.com with any other event, school or organization impacts — thanks. You can also share with us snow totals or photos at that address or from the Share tab at KTVZ.COM.)

But even before the continued Sunday snowfall, a weather spotter five miles north-northwest of La Pine reported around 8 a.m. that five inches of snow had fallen in the past 24 hours and 10 inches over 48 hours, at an elevation of about 4,200 feet. A social media report indicated a half-foot of snow had fallen by 12:30 a.m. at NorthWest Crossing in Bend.

Several inches of snow also were reported in northeast Oregon and southeast Washington.

Central Electric Cooperative reported about 3,600 members were out of power early Sunday afternoon. Crews said late Sunday morning that transmission breakers had gone out at the Madras, Gateway and Lone Pine stations. Midstate Electric reported no outages in its coverage area.

A southwest Redmond resident offered “big thanks to Central Electric Cooperative crews for getting the power back on so quickly!”

By early afternoon, CEC crews had restored power from two substations, in Lone Pine and Madras, but it remained out in parts of Madras and the Gateway area.

The city of Bend said its crews got some magnesium chloride anti-icing agent out on roads before the storm hit and had been out standing and plowing since 5 a.m.

City spokeswoman Anne Aurand said the the city is adding contractors to staff crews around 8 p.m. Sunday to focus on priority 3 (residential roads).

With the wet heavy snow, berms will be challenging for people to deal with, but with the forecast of below freezing temps for the coming week and in the single digits at night, we are getting what we can off the road before it freezes and locks up.

And tips and hints for snow removal are here: https://www.bendoregon.gov/government/departments/community-development/online-permit-center/code-enforcement/sidewalk-snow-and-ice-removal

In Madras, city officials said crews were operating all five snow plows to keep main routes open and officials urged motorists to avoid areas with downed power lines. They urged residents to stay off the roads unless a trip is absolutely necessary.