Reopening of U.S. Highway 20 east of Sweet Home after repair project delayed to Friday at midnight 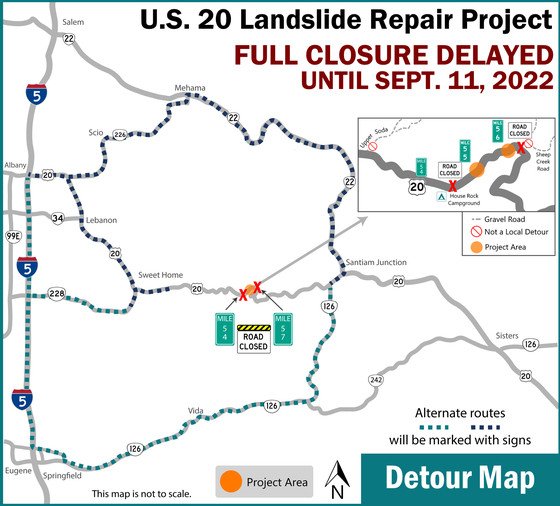 SWEET HOME, Ore. (KTVZ) – The two-week closure of U.S. Highway 20 east of Sweet Home for landslide repairs, delayed at the start due to fire danger, means the highway’s reopening has been delayed as well, until midnight Friday, ODOT said.

The project, originally scheduled for Sept. 9-21, began two days late due to the pause in highway work during “red flag” critical wildfire conditions, the agency said.

ODOT urges travelers to visit TripCheck.com for the most current information.

The agency said earlier, “We’re making this area safer by building a retaining wall, moving and rebuilding a section of the road, and repairing damage caused by landslides.”

The project is expected to be completed by the end of October, though schedules are subject to change. ODOT said it will notify the public of any changes.

You can find project details, detour information and sign up for updates by visiting ODOT’s project webpage.

The post Reopening of U.S. Highway 20 east of Sweet Home after repair project delayed to Friday at midnight appeared first on KTVZ.