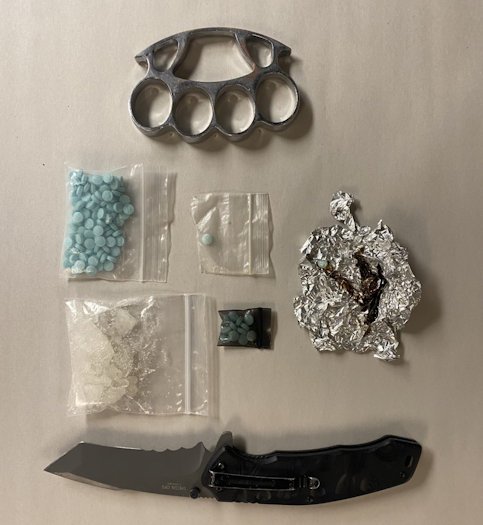 REDMOND, Ore. (KTVZ) – A Redmond man and woman were arrested as they arrived home late last week, allegedly returning from a trip to the Portland area to buy drugs, and a subsequent raid turned up fentanyl and methamphetamine, Deschutes County sheriff’s deputies said.

During a multi-county surveillance operation, the 34-year-old man and 26-year-old woman were seen in the Portland area and were believed to be buying drugs to distribute in Central Oregon, Janes said.

The pair were detained without incident when they arrived at their home, the sergeant said. The man allegedly possessed a commercial quantity of fentanyl and the woman in possession of a felony amount of methamphetamine.

Both were taken to the county jail in Bend and lodged on drug charges.

“The greater Portland area is a major transshipment hub where illegal drugs from the southwest border are stored in local warehouses, storage units, and residential properties,” Janes said in a news release. “The bulk shipments of drugs are usually broken down into smaller quantities and transported to other states or distributed to local dealers.”

“In addition, the Portland area has an international airport, interstate highways, and bus and train lines, making it easy for shipments to be smuggled to other destinations around the Pacific Northwest, the sergeant added.