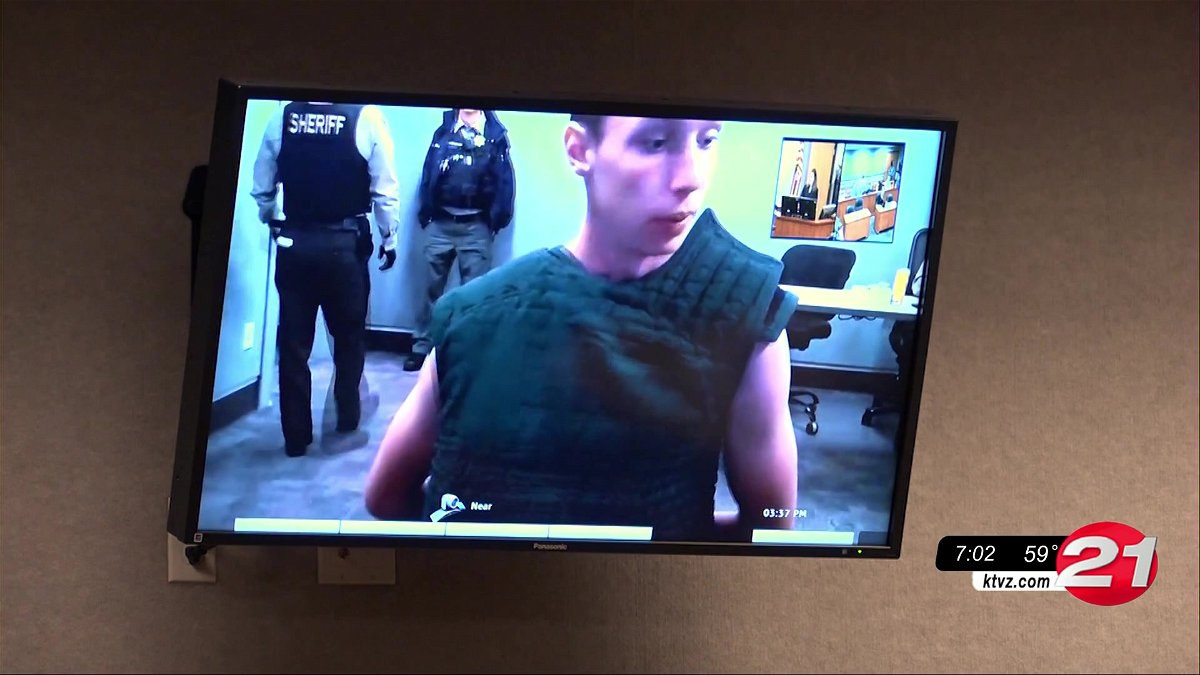 Alexander Smith’s next hearing is set for next Monday

BEND, Ore. (KTVZ) — Redmond resident Alexander Smith, 22, made his first court appearance Monday afternoon, with his lawyers waiving any formal reading of the second-degree murder and other charges until his arraignment in a week on an expected grand jury indictment.

He is being held at Deschutes County Jail without bail.

The 2018 Redmond high graduate is accused of killing 55-year-old Tina Klein-Lewis outside her home on Cloverdale Road last week. Deschutes County District Attorney John Hummel confirmed in a statement Monday that she was found dead by her boyfriend in the bucket of a tractor, but the cause of death and other details have not been made public as of yet.

The former OSU student in Corvallis was arrested three days later, a few miles away, in front of Jim Plank’s property on Jordan Road.

He said he believes his neighbor called paramedics for Smith, who looked in need of medical assistance.

Plank said during his arrest he was wearing a bandanna, socks but no shoes, and a blanket.

“So it didn’t look like it was that big a deal to me at the time,” Plank said. “But I was thinking, ‘Golly, Cloverdale is not too far away — and here’s this transient, and I wonder if he had any connection to the murder.”

Smith is being charged with four other crimes as well, in separate cases.

As a family member related Sunday to NewsChannel 21, sheriff’s deputies say on May 14 he broke into his parents home on SE 5th St. in Redmond.

Two days later, deputies said, he did it again.

His stepfather said they called the police on him, hoping it would help lead to mental health treatment.

They said he dropped out of OSU earlier this year and started showing signs of mental health problems and hearing voices.

On Friday, he’s accused of breaking into a building on Jordan Road, which Plank said is his neighbors unused shed.

The neighbor believes that’s where Smith was staying, breaking a window and leaving evidence that helped lead police to his arrest.

“So I’m just lucky he didn’t come over here,” Plank said with a nervous laugh. “Had my neighbor not called and the sheriffs not shown up, who knows? My property, or myself, or my wife could be in danger, so we’re glad it worked out that way.”

While Plank is grateful for his family’s safety, he knows another family was not so lucky.

“I just realize how life is — the slightest little thing could happen at any given time,” Plank said.

“On May 31, 2022, 55-year-old Tina Klein-Lewis was found deceased on her property located at 67450 Cloverdale Road in Deschutes County.  She was found by her boyfriend in the bucket of a tractor.

“On June 3, 2022, Deschutes County Sheriff’s Deputies responded to a welfare check call at 16373 Jordan Road in Deschutes County. The caller reported that an unknown man on the adjacent property asked him to call medics because he had infected feet and needed medical attention.  Sheriff’s deputies arrived, located the person who was alleged to be in medical distress, and eventually arrested him for the murder of Tina Klein-Lewis.  This person was 22-year-old Alexander Mark Smith.

“Smith had no known relationship with Tina Klein-Lewis.  Smith is a 2018 graduate of Redmond High, and until earlier this year, was a student at Oregon State University. “

Hummel, who said his office will present the case to a grand jury this week, concluded with this statement:

“By all accounts, Tina Klein-Lewis was a loving, kind, and gentle person. She leaves behind many people who loved her. Tina Klein-Lewis’ absence creates a void in our community.  My colleagues and I in the District Attorney’s Office, in partnership with the Deschutes County Sheriff’s Office, are giving this investigation our full attention, and we will ensure that justice is done.”