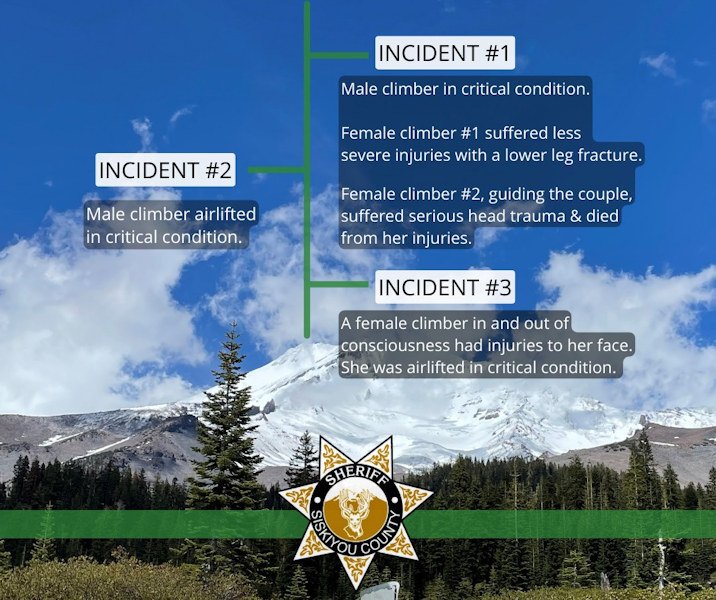 Several other climbers injured, one critically, in string of incidents over 24 hours

YREKA, Calif. (KTVZ) – A climbing guide from Redmond suffered fatal injuries in a fall while she was tethered to two other climbers Monday at Northern California’s Mount Shasta, the first of four rescue efforts on the 14,180-foot peak in 24 hours, the Siskiyou County Sheriff’s Office said Tuesday.

Jillian Elizabeth Webster, 32, of Redmond, was tethered to two other climbers ascending the peak above Helen Lake when one of the climbers lost their footing, causing all three to fall, the sheriff’s office said.

The three climbers slid on snow and ice about 1,500 to 2,500 vertical feet down the mountain, deputies said. The incident was reported at 8:35 a.m.

Webster was unresponsive after the fall, while a male in the climbing party was in critical condition with a fractured lower leg and head trauma and a female was alert and oriented, with a lower leg fracture, they said.

A nurse climbing nearby administered CPR to Webster, who was flown by a California Highway Patrol helicopter to Mercy Mount Shasta, the hospital where she later was pronounced deceased.

Another climber was reported injured late Tuesday morning and rescue efforts were reported in the area of Avalanche Gulch.

Due to the unstable, risky conditions, deputies asked any climbers to check with Forest Service climbing rangers before any attempts to summit the mountain.

Mount Shasta rises 14,180 feet above sea level in the Cascade Range and is typically snow-capped year-round. There are several non-technical routes that travel to and from the summit, and Avalanche Gulch is the most popular and provides the easiest access, the U.S. Forest Service told sfgate.com.

“What makes it dangerous right now is the change from really cold to really warm,” she said. “We had snow over the weekend, just a little bit of snow, and it created this thin layer of ice in Avalanche Gulch, and when it warms up, that thin layer of ice sloughs off so you have to have really good climbing gear — climbing boots that can really dig into ice.