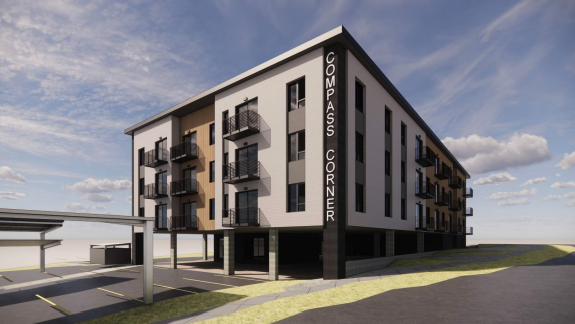 BEND, Ore. (KTVZ) — The city of Bend is reviewing a developer’s plans to build a four-story mixed-use apartment and ground-floor commercial project in northwest Bend, and a mix of public comments has been received so far.

The project, called Compass Corner, is proposed for the corner of Mt. Washington Drive and Awbrey Road.

The project has been open to public comment online, but developer Elizabeth LaFleur says it “is on a Type II Administrative Review track, i.e. not (requiring) a public hearing.”

Public opinion in the city application file on the project is relatively split thus far.

One commenter says, “I feel sorry for the homeowners that live next to the proposed site. Awbrey rd already has too much traffic and noise from people returning from downtown and the work trucks going on to Mt. Washington. Please don’t make this area worse. This does not fit the neighborhood layout.”

Meanwhile, a commenter in favor of the project says he drives in the area all the time, and adding more cars and units doesn’t look like a traffic disaster to him.

“Get busy and build this thing!” he added.

Noah Chast will be speaking with a city representative and some area residents both in favor and opposed to the project. You can catch that report tonight on NewsChannel 21 at Five.