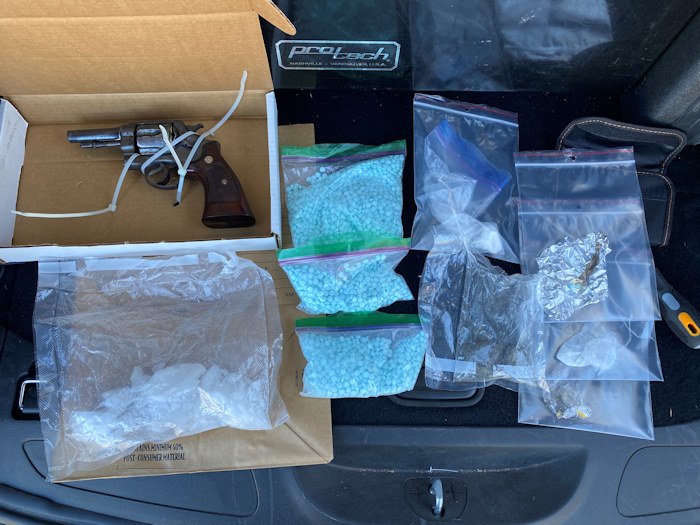 Variety of drugs seized from car

PRINEVILLE, Ore. (KTVZ) – Central Oregon drug agents pulled over and arrested a Prineville man and his girlfriend on Highway 26 north of Prineville on Wednesday, seizing an array of drugs and charging the pair with trafficking them from the Portland area to Central Oregon.

The Central Oregon Drug Enforcement Team concluded a long-term investigation with the arrest of the 26-year-old Prineville man and 22-year-old Redmond woman, having identified the man as a fentanyl trafficker in Crook County, Sergeant Kent Vander Kamp said.

He’s accused of importing fentanyl pills from the southeast Portland/Gresham area to Central Oregon and distributing them throughout the community. Vander Kamp said detectives also received information he might be armed with a gun.

He noted that one lane was blocked for two hours while waiting for the search warrant to be signed, but “traffic was only stopped long enough to take the two into custody.”

CODE Team detectives and Crook County sheriff’s deputies gathered and seized from the pair’s car a commercial quantity of fake pharmaceutical tablets made of fentanyl, along with powder fentanyl, cocaine, methamphetamine, heroin and other evidence of commercial drug sales.

The man and woman were lodged in the Crook County Jail on several drug charges. The man also was charged with felon in possession of a firearm and was held on an arrest warrant for absconding from parole.