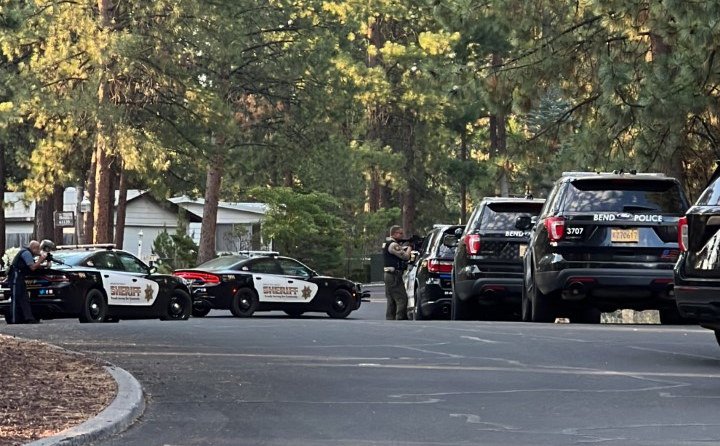 Using loudspeakers, calling on her to come out

BEND, Ore. (KTVZ) – Numerous police officers, including SWAT team members, surrounded a residence in southwest Bend Wednesday morning as officers tried to arrest a woman who apparently fired gunshots into an unoccupied home in northeast Bend overnight and was barricaded in a home.

Lt. Brian Beekman said the incident began around 3:30 a.m. and involved a female shooting a handgun into an unoccupied residence in northeast Bend.

“We believe we have her in a house down on Chuckanut,” he told NewsChannel 21.

The Central Oregon Emergency Response Team (CERT) was on scene, along with numerous officers.

“We have the house contained, because we believe she’s in it,” he said. “Neighbors can leave, we just ask they coordinate with us. We have a lot of people down here.”

Just before 7 a.m., Bend police tweeted: “We are in the neighborhood of Chuckanut Drive near Springcrest Drive in SW Bend trying to arrest a weapons offense suspect Please avoid the area until the scene is secure.”

Neighbors said they were hearing police calls on a loudspeaker for the person to come out with their hands up. One said they called dispatchers and were told it was safe to leave the area; another said it involved a single-wide manufactured home and that Deschutes County sheriff’s deputies also were on the scene.

NewsChannel 21’s Rhea Panela is headed to the scene and we’ll have updates as we get them.