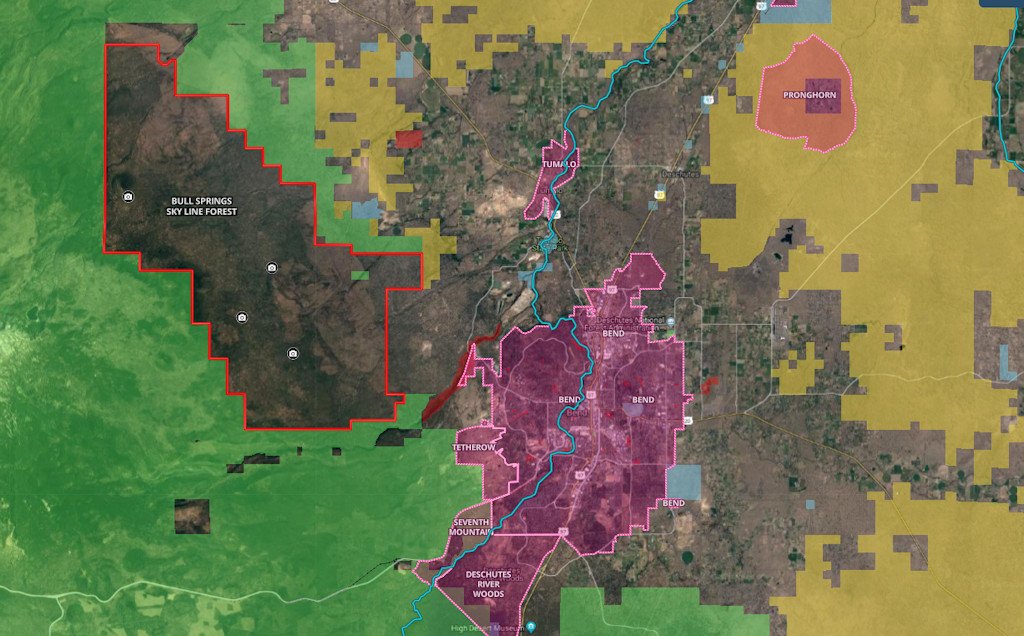 It’s bigger than Bend, up for sale and usually open to non-motorized access

BEND, Ore. (KTVZ) – The private owners of the 33,000-acre Bull Springs/Skyline Forest west of Bend – a tree farm bigger than the city itself — said Thursday they will be taking the rare step of closing off public access next week due to extreme fire conditions, to reduce the risk of human-caused fires.

The signs are expected to go up next week, as they haven’t arrived yet, and will say: “Extreme Fire Danger – Closed to Entry.”

“We need to protect our assets – not just that, but everything around it as well,” Johnson said, pointing to “a number of factors,” including “extreme drought – almost unprecedented drought. We’re at the point where fuels are extremely receptive to any ignition. Of course, we can’t control what lightning does, but we can control to some extent the human-caused fires.”

There are also long-range forecasts of “higher than average temperatures, low humidity and gusty winds,” according to Jason Reindorp, Shanda’s global head of communications and external relations.

As a result, Reindorp said, “Unfortunately, we can’t predict exactly when this closure will be lifted.”

The tree farm is open to the public at about a dozen access points to hikers, bikes, horses and the like — though not to motor vehicles. Signs have been put up making that clear, but Johnson said “the signs don’t last very long because they get spray-painted, vandalized, torn down.”

But at this hot, dry time of year, Johnson said Shanda is “taking a proactive stance. It’s the age-old thing with fire: Hope for the best and prepare for the worst.”

There will only be signs, no gates or other steps to block access. “Certainly in the beginning, it’ll be enforcement through education,” said Johnson, who has worked for nearly 30 years.

Thankfully, Johnson said, there haven’t been many large fires on the property over the seven years Shanda has owned it. “A good portion” of the Two Bulls Fire of 2014 was on that land, he said.

“The fires we have had, we’ve been able to put out quickly, with the help of the Oregon Department of Forestry,” as it’s state-protected land, Johnson said.

The upcoming closure is rare, but not unprecedented, he added.

The huge piece of property has been on the market for nearly three years, for the hefty price tag of $127 million, prompting Central Oregon LandWatch earlier this year to launch a community effort to “Save Skyline Forest,” one of the largest contiguous parcels in the West.

The post Owners of 33,000-acre Bull Springs/Skyline Forest west of Bend to close access due to high fire danger appeared first on KTVZ.