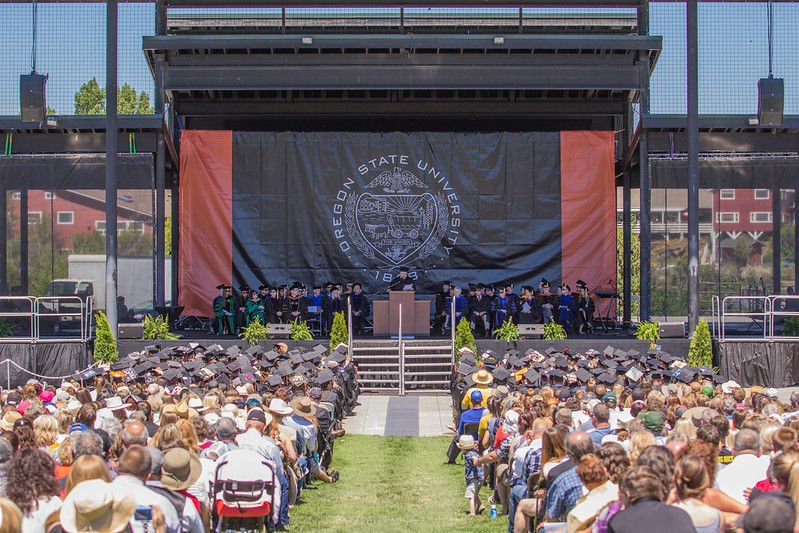 BEND, Ore. (KTVZ) — Oregon State University–Cascades will host the first-ever graduation event on its Bend campus on Sunday — and at the site of a former pumice mine, no less, representing the school’s continued growth.

The graduating class includes 290 students. Nearly 220 students plan to participate in the inaugural on-campus ceremony, and officials anticipate that more than 2,000 family and friends of graduates will attend.

The ceremony will take place at 10 a.m. Sunday on the oval green at the center of recently remediated land that was formerly a 100-foot-deep pumice mine, the site of future campus expansion.

Becky Johnson, interim president of Oregon State University, who served as the leader of OSU-Cascades from 2009 until 2021, will give the commencement address.

The OSU-Cascades campus opened in 2016, but it was not until this year that the grounds had been developed sufficiently to support a major event, officials said. In its early years, OSU-Cascades was housed in leased buildings and did not have a campus of its own.

A record number, 8% of this year’s graduating class, or 24 students, are veterans of the U.S. military service. Students of color represent 19% of the class.

Yadhira Chavez, who will receive a bachelor’s degree in elementary education and was selected by her faculty to receive a 2022 Distinguished Student award, is the student speaker.

Ray will present the OSU-Cascades Distinguished Service Award to Johnson during the ceremony. Johnson’s leadership of OSU-Cascades transformed the Central Oregon community’s expectations for attainment of bachelor’s, master’s and doctoral degrees, and its economic future. The award was established to honor individuals, businesses or organizations that have made exceptional contributions to OSU-Cascades, Central Oregon, the State of Oregon or the world.

Some facts and figures about the OSU-Cascades Class of 2022:

Each graduating student has a compelling story. For example:

To learn more about the OSU-Cascades Commencement Ceremony, visit osucascades.edu/commencement.

About OSU-Cascades:  Oregon State University’s campus in Bend brings higher education to Central Oregon, the fastest growing region in the state. Surrounded by 2.5 million acres of mountains and high desert, OSU-Cascades offers small classes that accelerate faculty-student mentoring and engages in top tier research as part of Oregon State University. Degree programs meet industry and economic needs in areas such as innovation and entrepreneurship, natural ecosystems, health and wellness, and arts and sciences, and prepare students for tomorrow’s challenges. OSU-Cascades is expanding to serve 3,000 to 5,000 students, building a 128-acre campus with net-zero goals.

The post OSU-Cascades to host its first on-campus graduation ceremony on remediated pumice mine site appeared first on KTVZ.