OSU-Cascades research, sponsored activities attract over $5.7 million in past year 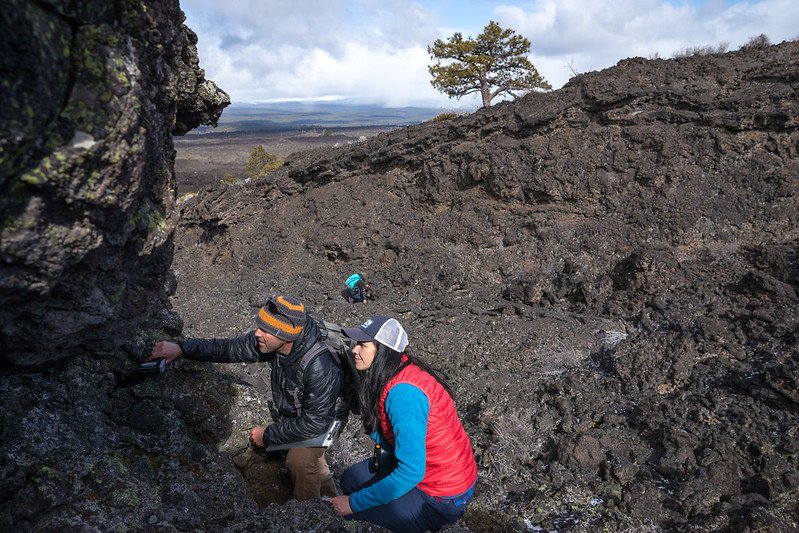 OSU sets record at more than $471 million in research funding

BEND, Ore. (KTVZ) — Research and other grant funding at Oregon State University – Cascades reached more than $5.7 million during the past fiscal year ended June 30, a record for the Bend campus.

Research at OSU-Cascades contributes to Oregon State’s leadership as the state’s top comprehensive public research university. This past fiscal year research funding at Oregon State topped $471 million, a university record and the fourth time in six years that OSU’s research awards have exceeded $400 million. Research funding received by the university includes governmental awards for research; revenue from business and industry for testing, licensing and other partnerships; and land grant funding provided by state and federal agencies.

“OSU-Cascades researchers and experts advance not only innovation, but also sustainability, health and wellness, and diversity and inclusion as they collaborate to create a better Central Oregon and better world,” said Chris Hagen, director of research for the Bend campus.

OSU-Cascades’ total research funding in the 2021 fiscal year included $1.6 million in federal and NSF  awards, $76,116 in grants from state agencies, and $46,909 in grants from local educational and nonprofit organizations.

CORVALLIS, Ore. – Research funding at Oregon State University increased by greater than 22% in the last fiscal year to more than $471 million, a university record.

In all, OSU research funding rose by $87.6 million, and fiscal year 2022 marks the fourth time in six years that OSU’s research awards have exceeded $400 million. The total includes governmental awards for research; revenue from business and industry for testing, licensing and other partnerships; and land grant funding provided by state and federal agencies.

The contributions of OSU research extend worldwide and include strengthening the early childhood education work force, transdisciplinary studies tackling the consequences of a rapidly changing ocean, and combating disease through the creation of novel proteins.

The total funding of $471.5 million for fiscal year 2022, which ended June 30, is the highest in OSU history by nearly $22 million, eclipsing the previous record of $449.4 million set in 2020. OSU-Cascades research funding topped $5.7 million, a record for the Bend campus.

Meanwhile, research expenditures by OSU grew for the 18th time in the last 20 years.

“Those expenditures are a strong indicator of research activity and, even more importantly, are indicative of impactful results,” said Irem Tumer, OSU vice president for research. “Research expenditures represent dollars invested in laboratories and field work in pursuit of new knowledge that improves and enriches lives through better health and greater resilience for people, communities, economies and the environment.”

“Oregon and national leaders continue to recognize Oregon State University’s ability to provide leadership in seeking and expanding new sources of green power,” Tumer said. “OSU researchers work along the full range of scientific endeavor, from curiosity-driven collaborative projects that expand our knowledge of how the world and the galaxies work to targeted applications like clean energy that promote economic, societal and environmental well-being.”

Last winter the Department of Energy awarded $25 million to eight groups for the testing of wave energy technologies at PacWave South. Construction on the approximately $80 million facility began in June 2021, and when completed it will be the first commercial-scale, grid-connected wave energy test site in the United States.

Also included is a $14.4 million grant by the state of Oregon’s Early Learning Division for to establish a statewide Early Learning Systems Initiative center focused on strengthening the early childhood education workforce in Oregon.

The new center will be located in College of Public Health and Human Science’s Hallie Ford Center and will provide support and training from an anti-bias, culturally responsive lens to better equip educators who care for children from marginalized populations and for children who have experienced trauma.

Oregon State is part of an $8 million nationwide effort by the U.S. Department of Energy to update and improve the operation of hydroelectric generation systems, many of which are roughly a century old.

OSU’s $1.9 million portion of the project entails using the university’s Wallace Energy Systems & Renewables Facility to explore ways to enhance grid function and flexibility as the grid receives more electricity from wind and solar sources and deals with modern demands such as the charging of electric vehicles.

Oregon State researchers expect grid improvements to be implemented within the next five to 10 years and to remain relevant for decades to come.

In addition, Oregon State was selected to host a National Oceanic and Atmospheric Administration institute focused on collaborative study of the rapidly changing ocean and expanded demands on its use. The Cooperative Institute for Marine Ecosystem and Resources Studies, or CIMERS, focuses on four research themes: conservation, protection and restoration of marine resources; marine ecosystems; ocean acoustics; and ocean, coastal and seafloor processes.

Through the institute, OSU and NOAA scientists work together to tackle crucial research projects, including climate impacts on Pacific salmon populations, expanding ocean low-oxygen zones, risks posed by undersea volcanos and impacts of human activities on the ocean soundscape.

Institute researchers are working to connect ocean science to the public and recently provided testimony to the U.S. House Select Committee on the Climate Crises. The institute is eligible for up to $37 million in funding over five years.

The Center for Oldest Ice Exploration, or COLDEX, was created under a five-year, $25 million Science and Technology Center award from NSF. OSU is leading an effort to discover Antarctica’s oldest ice and to learn more about how the Earth’s climate has changed over the past several million years. The center brings together experts from across the United States to generate knowledge about the Earth’s climate systems and to share this knowledge to advance efforts to address climate change and its impacts.

The NSF also selected OSU and the University of Washington to lead a collaborative research hub focused on increasing resiliency among coastal communities in the Pacific Northwest. The initial award for the Cascadia Coastlines and Peoples Hazards Research Hub, or Cascadia CoPes Hub, is for $7.2 million, and the total request over five years is nearly $18.9 million.

The hub will help coordinate research in Pacific Northwest coastal communities among numerous academic and government organizations to inform and enable integrated hazard assessment, mitigation and adaptation in collaboration with local communities.

A $5.6 million five-year grant was awarded to OSU from the National Institutes of Health to launch a research center devoted to genetic code expansion, which allows for the creation of novel proteins with disease-fighting potential.

The mission of the new center, named GCE4All and hosted by the OSU College of Science, is to improve the technologies underpinning genetic code expansion so they can be more widely used in diagnosing and treating diseases by revealing the mechanisms behind sickness and health.

Also in the area of wellness studies, an interdisciplinary team at Oregon State received a nearly $5 million grant to create a new research center to transform what scientists know about environmental health risks for children into public health interventions and policy. The grant is from the National Institute of Environmental Health Sciences, part of the NIH. It will fund the OSU “ASP3IRE” Center, one of six children’s environmental health research translation centers in the country.

On top of nearly $25 million in funding from local governments and the state of Oregon, federal funding totaled $300.95 million, accounting for 64% of OSU’s fiscal year 2022 research grants and contracts, the same percentage as in fiscal year 2021.

Oregon State’s federally sponsored projects include Department of Agriculture awards for studying the impact of smoke exposure on grapes and for defining economic opportunities for hemp in the western United States.

The four-year, $7.65 million smoke exposure project will provide critical knowledge to grape growers and winery owners severely impacted by widespread wildfires in recent years. A five-year, $10 million hemp project will address the needs of Native American Tribal nations and communities, and other rural community businesses and farmers in a four-state Western Pacific region.

Research funding also was derived from Oregon State’s land grant capacity funds, which consisted of $77.8 million in state appropriations and $11.5 in federal appropriations. The total of $89.3 million was up more than $14 million from a year ago.

Other funding sources were nonprofit organizations, including foundations, which accounted for $9.9 million; and foreign governments, just under $984,000, a more than 100% increase.

Business and industry support for OSU research includes technology licensing payments, contracts for testing, support through the Agricultural Research Foundation and research gifts through the OSU Foundation. Almost half of the revenues covered costs for technology testing services, which OSU labs do to document the performance of innovative private sector products and services and to meet public and nonprofit sector needs.

“Partnerships, innovation and entrepreneurial activity are the keys behind the success of these types of projects,” Tumer said. “Continued research investments by industry and others looking to create economic opportunities show Oregon State’s ever-growing leadership in fields from tourism to agriculture and human health to marine sciences, renewable energy, climate solutions, robotics, business, liberal arts and forestry. Our faculty regularly collaborate with experts around the world to solve problems, and this year an OSU-record nine of them will work abroad as Fulbright U.S. Scholars.”

An important business enabler at Oregon State is the OSU Advantage Accelerator, which spurs societal and economic impact through the innovation and entrepreneurship ecosystem. Specific innovation-based efforts have received funding through the state-authorized University Venture Development Fund, which allows donors to the OSU Foundation to receive a 60% tax credit for contributions. Over the past decade, donors to the foundation have contributed more than $6 million to the UVDF.

OSU scientists have leveraged the UVDF to investigate the market potential of research-based innovations.

Inpria, a spinout company from the Department of Chemistry and a 2009 UVDF recipient, was acquired in September 2021 for $514 million by Japanese firm JSR. Inpria developed a revolutionary material used in microchips.

In April, OSU startup Agility Robotics secured $150 million in new investment, and the following month another Oregon State startup, NuScale Power, went public with a Wall Street valuation in excess of $2 billion. NuScale was founded on three key OSU patents and launched in 2007.

“Our faculty and student entrepreneurs are unrelenting in their mission to drive innovation toward commercialization because of their dedication to maximizing OSU’s impact,” Wall said. “And the world-class research capabilities at Oregon State, the University Venture Development Fund and the OSU Advantage programs offer tremendous support.”

The post OSU-Cascades research, sponsored activities attract over $5.7 million in past year appeared first on KTVZ.