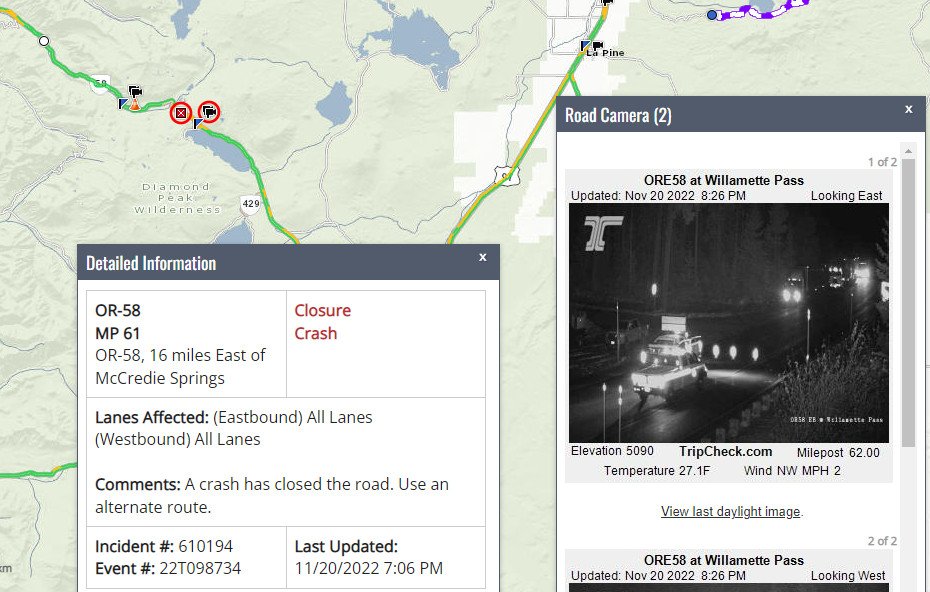 OAKRIDGE, Ore. (KTVZ) – A 26-year-old Portland woman has been arrested on manslaughter, drugged and drunk driving and other charges in a head-on crash last month on Oregon Highway 58 near Willamette Pass that killed a 5-year-old girl and injured five others, Oregon State Police said.

OSP troopers on Thursday arrested Amber Shaleen Gonzalez Riddle and booked her into the Lane County Jail on charges of second-degree manslaughter, two counts of reckless endangering, two counts of third-degree assault and DUII-drugs and alcohol in connection with the crash that occurred the evening of Sunday, Nov. 20.

The crash was reported shortly after 6 p.m. at milepost 61, a mile from the summit, near Odell Lake and about 25 miles east of Oakridge, officials said.

The initial investigation found Gonzalez Riddle, with three passengers was driving a westbound Honda Accord when she crossed into the eastbound lane and collided with a Toyota RAV4 driven by a 66-year-old Sunriver woman with one passenger.

The Toyota caught fire and became fully engulfed after the occupants were removed, OSP said.

Gonzalez Riddle, a 23-year-old Portland man and 3-year-old girl were injured and taken to a nearby hospital, troopers said, while a 5-year-old girl sustained fatal injuries. The Sunriver woman and her passenger, a 67-year-old Sunriver man, also went to the hospital with injuries.

Highway 58 was closed or limited for about six hours while OSP’s Collision Reconstruction Unit investigated the scene. ODOT said there was no detour and advised motorists to delay travel or take other routes.