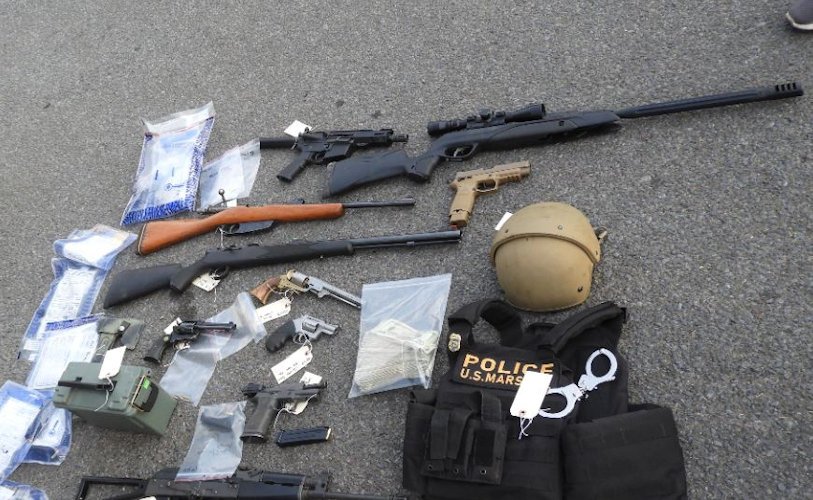 Along with 9 guns, deputies find ‘US Marshals’ body armor; car had police lights and siren

BEND, Ore. (KTVZ) – Bend RV dealer employees spotted a man and woman sought by Deschutes County sheriff’s deputies in a recent rash of thefts from parked vehicles at trailheads and day-use areas, leading to the arrest of two Washington state residents, one a fugitive, and recovery of stolen items, guns and body armor.

The arrests came a day after the sheriff’s office turned to the public for help last Friday and released several Bend Walmart security photos of the pair’s tattoos in hopes of locating the suspects, who allegedly used stolen debit and credit cards to buy gift cards at the store.

Around 11:45 a.m. Saturday, the sheriff’s office got a call from All Seasons RV & Marine, where the caller said the man and woman were in the store and the man was concealing a handgun in his waistband, Sergeant Jayson Janes said Tuesday.

Deputies quickly contacted and detained the 33-year-old man and 26-year-old woman. Janes said the man was in possession of a 9 mm semi-auto handgun and suspected fentanyl pills. He also was found to have a nationwide warrant for his arrest on escape charges out of Washington.

Sheriff’s detectives obtained a search warrant to search the pair’s truck and trailer, Janes said. Inside, they found numerous ID and credit cards from the trailhead and day-use area thefts, as well as property from a La Pine-area burglary.

Deputies found and seized nine guns, replica police badges, a body armor vest with US Marshal’s markings and a ballistic helmet, the sergeant said. The man’s truck also was equipped with red and blue emergency lights and a siren. Deputies also seized methamphetamine and suspected fentanyl.

The pair were booked into the county jail on numerous charges, including racketeering, nine counts of felon in possession of a firearm, drug manufacture, delivery and possession, felon in possession of body armor, first-degree aggravated theft and criminal impersonation of a police officer. The man also was charged with giving false information of a police officer and the warrant for escape.

Janes said more charges are likely, as deputies continue to sort through seized items for evidence of more crimes.

“The sheriff’s office would like to thank the observant community member for reporting what he was observing to our office,” Janes wrote. “His actions helped not only our office, but other law enforcement agencies solve a number of cases.”

At All-Seasons’ parts department, worker Travis Overbey gave most of the credit to co-worker Dillon Wiseman for the initiative and legwork that led to the phone call to dispatchers and arrest of the pair, who had been in a couple times for a part and to use the RV dump station.

They had looked at the news article before closing time Friday and “noticed the face immediately,” as well as the distinctive shirt he wore — and the “handgun on his hip,” Overbey said Tuesday.

He said Wiseman happened to remember the RV part that the man bought and ran it in their system, where he’d used his own name, also checking video footage.

But before they could pass the info along to the sheriff’s office, the couple came in again Saturday morning. A co-worker watched the store while Wiseman “ran and called in the cavalry,” Overbey said.

They checked the jail to see what charges they faced, and Overbey said it was “pretty crazy.”