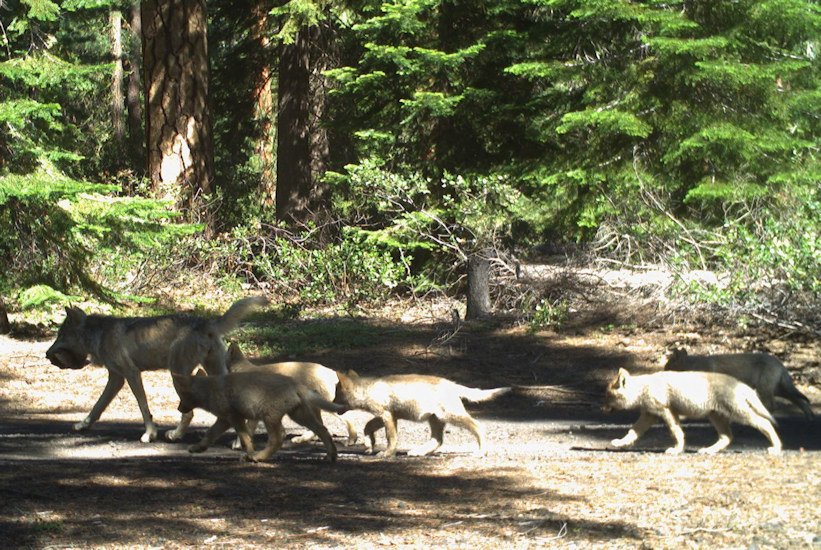 BEND, Ore. (KTVZ) — A trail camera captured a photo of an adult wolf and five pups on the Fourth of July, prompting the Oregon Department of Fish and Wildlife to designate a new “Area of Known Wolf Activity” in the Upper Deschutes wildlife management unit in Klamath and Deschutes counties, the agency said Wednesday.

ODFW said it has been monitoring reports of a single wolf in the area since August 2021 and one wolf was counted during the winter count.  Early this year, the tracks of four wolves were found in the area, and since then, biologists have been working to determine if the activity represented newly established wolves or wolves from the Indigo Pack just to the south.

Last week biologists picked up a trail camera that had pictures of an adult wolf with five pups (photo) photographed on July 4. This confirmed that a new group of wolves had become resident in the area.

ODFW spokeswoman Michelle Dennehy said she did not have more specifics on where the trail camera photo was taken, but shared maps of the estimated use areas for these and other known Oregon wolves (click on the Deschutes and Klamath county links for the sections of the mapped area that spans the county line).

This is another example of a new wolf use area being discovered thanks to reports from the public, which help biologists focus their monitoring. As a reminder, wolf sightings can be reported at https://dfw.state.or.us/wolves/

AKWAs are created where and when wolves have become established, meaning an area is used repeatedly over time by the same wolves and not simply dispersing wolves moving through the area. The designation also helps alert livestock producers about wolf presence.

Livestock producers in the AKWA are encouraged to consider non-lethal measures to reduce any potential conflict with wolves, ODFW said. Find out more at https://dfw.state.or.us/Wolves/non-lethal_methods.asp.

Depending on how many wolves are in this group of wolves at the end of the year, it may be designated the Upper Deschutes Pack. A pack is defined as at least four wolves traveling together in winter and typically includes at least two adult wolves and offspring.

While, at this time, biologists have mapped an estimated area used by these wolves, additional surveys will be conducted to learn more about the group’s specific home range.

See the estimated use area map by clicking on the Klamath and Deschutes County maps at https://dfw.state.or.us/Wolves/Packs/index.asp.