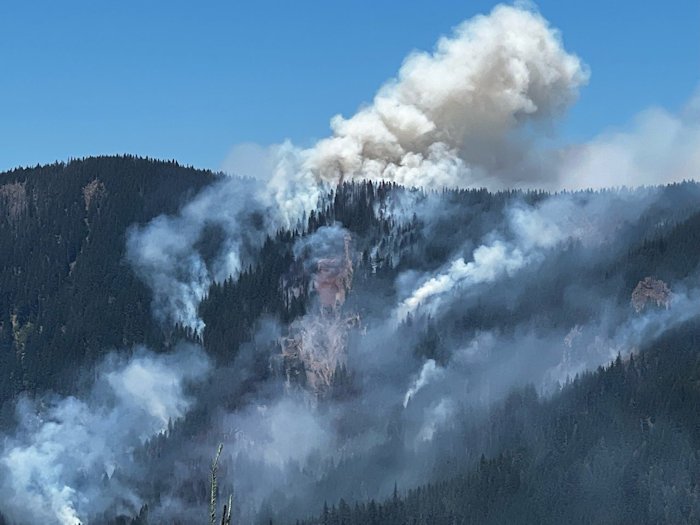 A new fire called the Cedar Creek Fire, caused by the lightning over the area in the last few days, is about 500 acres and approximately one mile west of the Black Creek Trailhead on the 2421 road, about 18 miles due east of Oakridge 3.5 miles west of Waldo Lake and about 6 miles north of Highway 58.

An emergency closure is in place in the area. Hikers and other forest users are asked not to use trails off the Forest Service roads 2421 or 2424. The fire is continuing to be very active, moving north, spotting in all directions and putting up a large plume.

The Cedar Creek Fire was reported as a single smoke late on Monday, August 1st, as local crews were scrambling to respond to 20 or 30 fire reports. A load of helicopter rappelers were sent in Tuesday, August 2nd, but turned down the assignment, reporting the terrain was too hazardous for safe access.

As other options were considered, two other firefighters were sent in along the 2421 road to find an access point. They did locate the fire and estimated it to be five acres at that time. A helicopter was assigned to make water drops most of Tuesday as the forest tried to find a safe route to bring in more firefighters.

An early detection flight today, August 3rd, estimated the new size at about 100 acres. A helicopter was assigned again today, however, it experienced a mechanical issue and a Type 2 helicopter proved to be ineffective. Another Type 1 helicopter has been ordered along with a Type 1 Incident Management Team.

Pictures show the fire is in very inhospitable terrain.