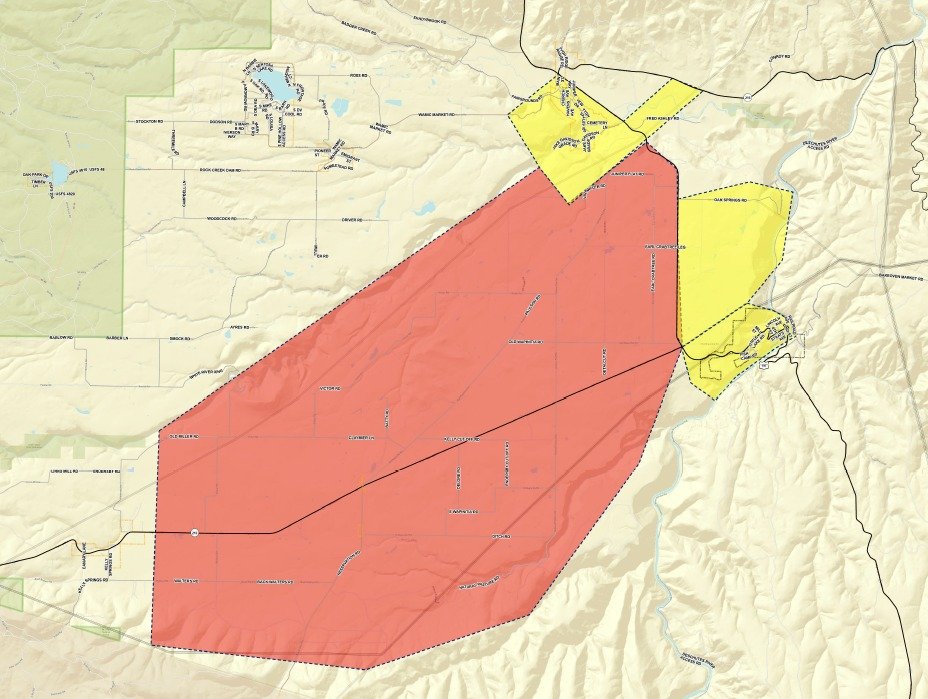 SALEM, Ore. (KTVZ) — Gov. Kate Brown late Tuesday invoked the Emergency Conflagration Act in response to the Miller Road/Dodge Fire burning near the community of Juniper Flats in Wasco County. The fire sparked Tuesday afternoon and is burning grass, brush, and juniper; it is currently estimated to be 1,000 acres in size.

The Wasco County Sheriff has issued Level 2 and Level 3 evacuation orders for homes near the fire, including a Level 2 “Get Set” alert for Tygh Valley. ODOT said  Oregon Highway 216 is closed from the junction with U.S. 197 to Pine Grove (milepost 26-13) due to the wildfire and urged motorists to use an alternate route.

Local and mutual aid resources are on scene working to slow the fire’s progress, and a Lane County task force, which was pre-positioned in Deschutes County, is headed to the fire.

“I have invoked the Emergency Conflagration Act to make more state resources available to the fire crews on the front lines in Wasco County at the Miller Road/Dodge Fire,” said Governor Brown. “With many fires actively burning across the state and several weeks of peak fire season ahead of us, I am urging all Oregonians to be prepared and do their part to help prevent wildfires — just one spark can light a fire that will quickly spread. Please continue to follow local and statewide fire prevention regulations and share what you know with others. Every fire we prevent helps us keep our communities and firefighters safe, and our natural resources protected.”

In accordance with ORS 476.510-476.610, Governor Brown determined that a threat to life, safety, and property exists due to the fire, and the threat exceeds the firefighting capabilities of local firefighting personnel and equipment. The Governor’s declaration cleared the way for the State Fire Marshal to mobilize firefighters and equipment to assist local resources battling the fire and further support a coordinated response.

Additional updates for the incident may be accessed at:

Information on wildfire prevention and preparedness may be accessed at:

There was better news Tuesday on other blazes, including the 280-acre Fly Creek Fire near Lake Billy Chinook, where about 140 firefighters boosted containment to 80%. The Perry South and Monty campgrounds remained closed, but the pre-evacuation alert level dropped from 2 (“Get set”) to 1 (“Be Ready”) for the Three Rivers and Montgomery Shores areas.

The Windigo and Potter fires began between July 30 and July 31. The fires are burning on lands managed by the USDA Forest Service, on the Umpqua National Forest and the Willamette National Forest, and adjacent to the Deschutes National Forest.

The fires are burning primarily in a mix of timber with heavy dead and down trees. There was significant lightning activity in the area over the weekend, and combined with the triple digit heat, the occurrence of fire was not unexpected. The fires are being fought under the strategy of full suppression. Shawn Sheldon shared with firefighters that the team’s goal “is to keep the fires as small as possible” and to continue the work of the initial attack crews.