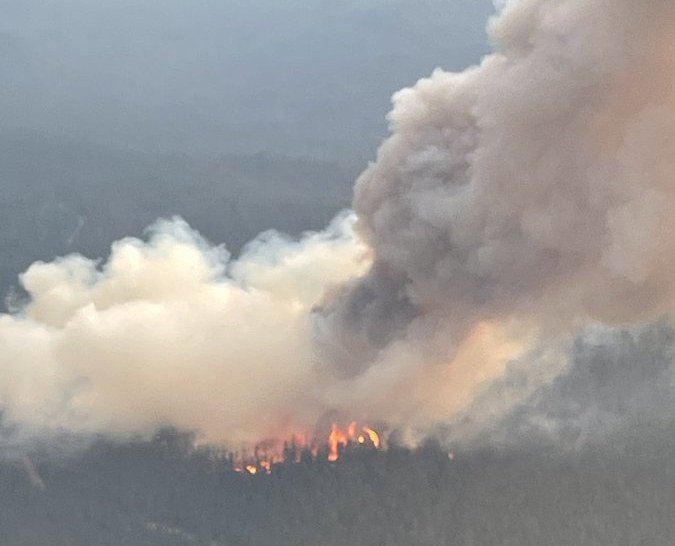 The as-yet unnamed fire was burning in timber off Forest Service Road 60 on the Douglas-Klamath county line, with ground and air firefighting resources being called in.

The Tolo Mountain Fire, meanwhile, got some rainfall, but also gusty winds as a thunderstorm moved through the area Saturday, officials said.

Fire lines were being tested but holding with the cooler temperatures and some rain. Fire crews disengaged for safety reasons on Saturday due to high winds and lightning.

They were joining several crews, engines, 10 smokejumpers and a local Type 3 Incident Management Team that assumed command of the fire Saturday around 6 p.m., officials said in Saturday morning’s update — the first to report that the cause of the blaze was determined to be lightning.

Firefighters were able to construct fireline around the approximately five-acre spot fire, officials said, and that line held through the night. Air tankers dropped retardant on a second spot to the east of the five-acre spot, and crews were building containment lines around it Saturday.

Continued hot and dry conditions will challenge suppression efforts Saturday, with more triple digit temperatures, relative humidity in the single digits and critically dry fuels. There’s also a chance for thunderstorms in the area, which will likely bring breezy conditions to the fire area in the afternoon.

Air tankers and heavy helicopters are available to assist firefighters on the ground in cooling hot spots and moderating fire behavior if needed.

As the region bakes in a heat wave, Redmond Airport broke a record for the fifth straight day, hitting 108 degrees, snapping the old July 30 mark of 104 set two years ago.

There was word late Saturday afternoon of a new fire start five miles north-northwest of the Tolo Mountain Fire, on the Umpqua National Forest, that’s very visible from the surrounding area. It had burned about three acres of heavy timber. Central Oregon fire managers were monitoring its progression near the Deschutes National Forest boundary.

In Jefferson County, crews reported tackled and stopped around a small brush fire late Saturday afternoon near the Culver Highway and Park Lane.

And the pace of fires could quicken, soon. The National Weather Service in Pendleton issued a red flag warning Saturday afternoon for “abundant lightning” over much of the region, in effect until 11 p.m., and another for 2 p.m. Sunday to 11 p.m. Monday.

The Tolo Mountain Fire, about three miles north of Cappy Mountain on the Crescent Ranger District, was reported Wednesday at 5:45 p.m. and is burning in heavy timber, with a mix of standing dead and downed wood.

The fire was first reported about six miles west of the Two Rivers subdivision and north of the Mount Thielsen Wilderness Area.

Ten smokejumpers initially responded to the fire Thursday morning and were joined by the Prineville Interagency Hotshots, two engine crews, a five-person hand crew and a bulldozer. Air tankers also supported the suppression efforts, along with a heavy helicopter using Crescent Lake as a water dip site.

The fire has not led to any closures, and the Pacific Crest Trail, about 2 ½ to 3 miles from the fire, remains unaffected, officials said.