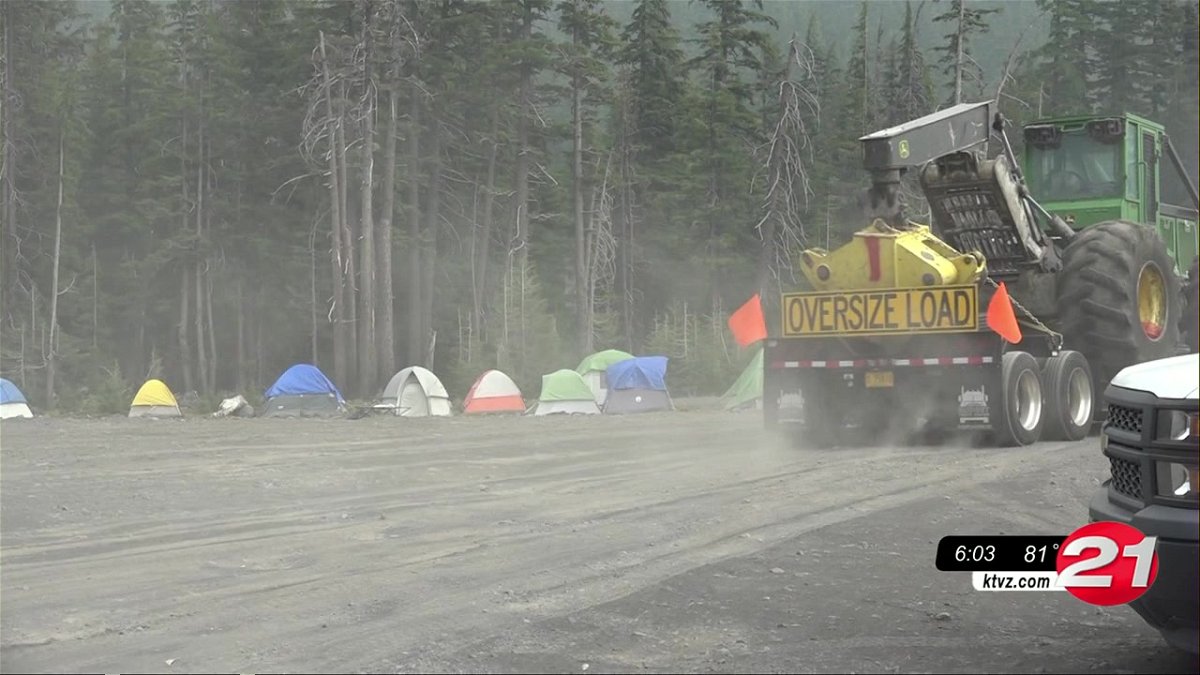 BEND, Ore. (KTVZ) — Fire crews staying and working at Mt. Bachelor have a common mission, outside of putting out the Cedar Creek Fire entirely. It’s to stop the fire from going farther east — and at the same time, to be as prepared as possible to protect lives, homes and property, in case it does.

The ski resort is now filled with command centers, food stations and tents for more than 600 firefighters and crew members.

With the Cedar Creek Fire exploding to about 87,000 acres over the weekend, Team Alaska and Deputy Incident Commander Chuck Russell were called in as part of a national response.

“We come together to help out with the national effort, and when it’s our turn, we go where we’re ordered to go,” Russell said Monday.

Mt. Bachelor has enough space, and is in the right spot to host an incident command center.

In addition, several nearby sno-parks are filled with semi-trucks and the oversized machinery being used to fight the fire.

There are 68 pieces of heavy machinery in use and more than 1,200 crew members overall.

The fire has shown no signs of slowing down.

“So what we’re looking at as far as this map goes is, the red lines there are uncontained lines,” Russell said pointing at a fire map. “As you can see, it’s a huge footprint.”

Most of this center’s focus: Stopping the fire from moving east and fortifying the Cascades Lakes Scenic Byway, along Crane Prairie Reservoir and Wickiup Reservoir.

“And so we’re counting on prepping this and being prepared for the fire’s advancement to that location,” Russell said.

The biggest concern? The fire moving right between the two reservoirs, toward La Pine and Sunriver.

NewsChannel 21 asked Russell how realistic he thinks that chance is.

“We’ll just have to see what kind of weather that we get,” Russell said. “Be as prepared as we can on (Highway) 46, so that if we need to burn out as the fire gets closer, or take some other tactics, that we’re prepared to do so and have set ourselves up for the best chance of success.”