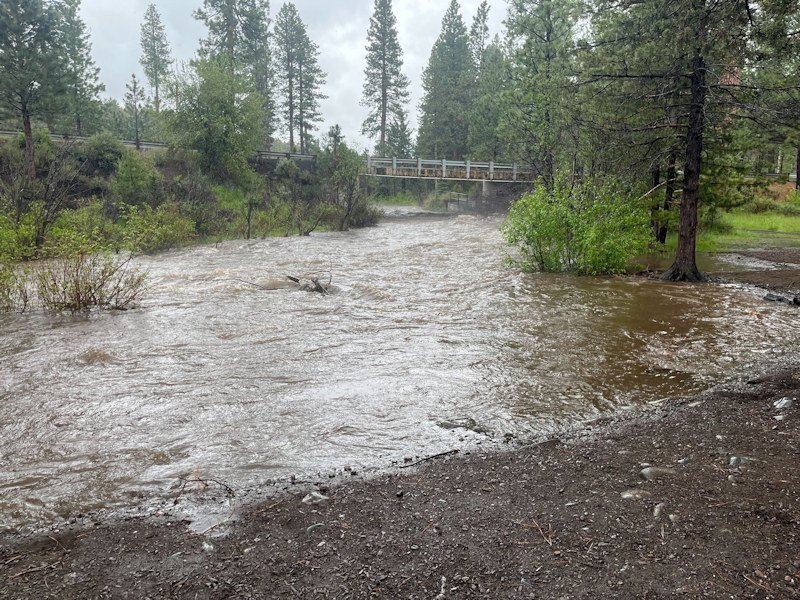 BEND, Ore. (KTVZ) – The latest round of wet storms in a cool, rainy late spring was sending rivers and creeks rising Saturday across the Northwest and on the High Desert, where Tumalo Creek and the Deschutes River near Bend were running high, swift and muddy.

The flow in Tumalo Creek likely exceeded 400 cubic feet per second when it peaked at mid-morning, according to Kyle Gorman, region manager for the Oregon Water Resources Department.

“We have had a combination of melting snow and significant rain causing the high flows,” Gorman said. “Depending on how much more rain we get, the flow will continue to be high.”

Shevlin Park visitor and long-time Bend resident Loren Irving said he’d never seen Tumalo Creek running so high and fast, “and I’ve lived here since ’69.” He said he saw the water rise past the banks in some spots and up to the level of a couple of picnic tables, about a foot around the bottom.

Meanwhile, Tumalo State Park Manager Joe Wanamaker said Saturday he couldn’t recall seeing the high and swift Deschutes River flowing so muddy through the area, but that no issues had arisen to this point.

“I’ve been at this park for over three years and don’t remember seeing it this high/fast/muddy during summer river levels,” Wanamaker said.

And while automated SNOTEL measurements show precipitation and snow-water content at or above average for this time of year, years of drought conditions linger across the region, although the latest Oregon Drought Monitor shows smaller areas of “exceptional” and “extreme” drought from past months.

National Weather Service forecasters in Portland said Saturday the Columbia River is expected to approach minor flood stage between Vancouver and Kelso, Washington late in the weekend into early next week, for the first time in a few years, and high flows are expected through at least the middle of next week.

“Those venturing into the river should be prepared for cold water and unusually powerful currents,” a hydrologic outlook stated. “A few paths along the river’s edge may also become submerged.”

Also unusual for mid-June: the NWS in Medford issued a freeze watch for much of Klamath and Lake counties for late Sunday night and Monday morning.

In northeast Oregon, meanwhile, NWS-Pendleton issued a flood watch through late Sunday night for areas of northeast Oregon and southeast Washington, including the Blue Mountains and foothills, and the flood watch also extended east into portions of Idaho. (A possibility of strong thunderstorms also were in the mix for northeast Oregon.)

NWS-Pendleton said minor flooding is expected along the Grande Ronde River near Troy as “rivers around the Pacific Northwest will continue running full, fast and cold,” as well as “ponding in low-lying areas and areas of poor drainage.”

The Oregon Department of Geology and Mineral Industries issued this advisory to the public:

Be alert for landslides across areas of Eastern Oregon

Heavy rain may result in landslides in areas of steep terrain, as well as debris flows in and near burned areas from recent wildfires.

Debris flows are rapidly moving, extremely destructive landslides. They can contain boulders and logs transported in a fast-moving soil and water slurry down steep hillsides and through narrow canyons. They can easily travel a mile or more. A debris flow moves faster than a person can run. People, structures, and roads located below steep slopes in canyons and near the mouths of canyons may be at serious risk.

If your home, work, or travel route is in a watch area: