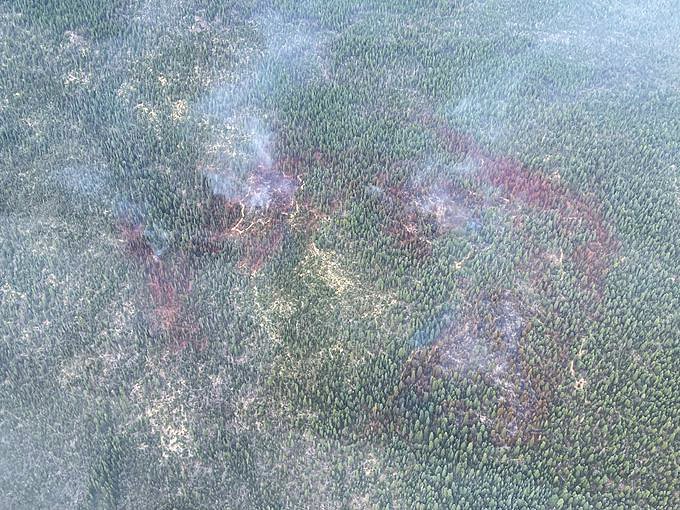 They are joining several crews, engines, 10 smokejumpers and a local Type 3 Incident Management Team that will assume command of the fire Saturday around 6 p.m., officials said in Saturday morning’s update — the first to report that the cause of the blaze was determined to be lightning.

Firefighters were able to construct fireline around the approximately five-acre spot fire, officials said, and that line held through the night. Air tankers dropped retardant on a second spot to the east of the five-acre spot, and crews were building containment lines around it Saturday.

Continued hot and dry conditions will challenge suppression efforts Saturday, with more triple digit temperatures, relative humidity in the single digits and critically dry fuels. There’s also a chance for thunderstorms in the area, which will likely bring breezy conditions to the fire area in the afternoon.

Air Tankers and heavy helicopters are available to assist firefighters on the ground in cooling hot spots and moderating fire behavior if needed.

The Tolo Mountain Fire, about three miles north of Cappy Mountain on the Crescent Ranger District, was reported Wednesday at 5:45 pm and is burning in heavy timber, with a mix of standing dead and downed wood.

The fire was first reported about six miles west of the Two Rivers subdivision and north of the Mount Thielsen Wilderness Area.

Ten smokejumpers initially responded to the fire Thursday morning and were joined by the Prineville Interagency Hotshots, two engine crews, a five-person hand crew and a bulldozer. Air tankers also supported the suppression efforts, along with a heavy helicopter using Crescent Lake as a water dip site.

The fire has not led to any closures, and the Pacific Crest Trail, about 2 ½ to 3 miles from the fire, remains unaffected, officials said.