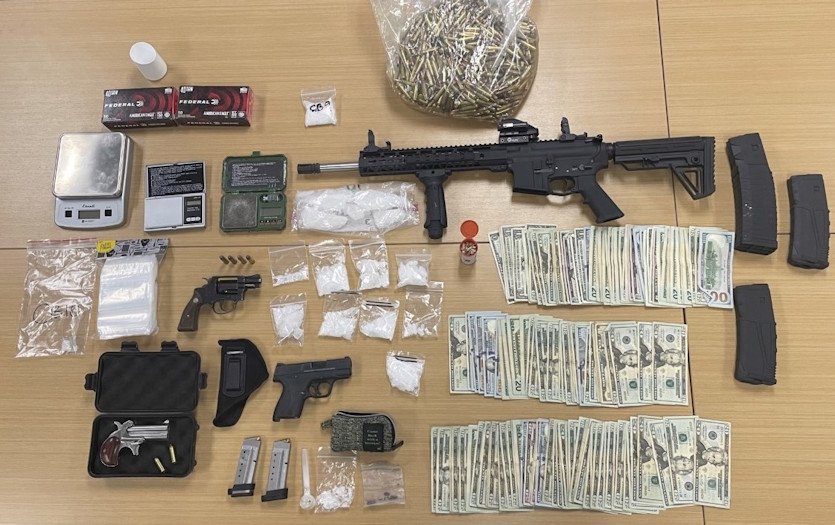 BEND, Ore. (KTVZ) – Deschutes County Sheriff’s Street Crimes Unit detectives seized methamphetamine, a stolen handgun and about $3,500 in cash when they pulled over a 48-year-old Bend man in northwest Bend Wednesday afternoon. A raid on his northeast Bend home turned up more drugs and several guns.

The Street Crimes Unit conducted a short-term investigation into the man’s drug sales in the county, Detective Sergeant Doug Sullivan said, learning Wednesday he was in the county with possible drugs in his possession.

Detectives spotted him driving a pickup truck on Northwest Albany Avenue and stopped him near the intersection of 14th Street, Sullivan said.

A search warrant was executed on the Toyota Tacoma and found the stolen handgun, about six ounces of meth and the cash.

Detectives served a second search warrant at his residence on in the 1000 block of Northeast Hidden Valley Drive, finding several more firearms, including an AR-15-style rifle, Sullivan said, along with nearly eight ounces of meth.

The man was booked into the county jail on charges of meth possession, manufacture and attempted delivery, as well as first-degree theft by receiving for the stolen gun and four counts of felon in possession of a firearm.

Sullivan said the investigation is ongoing and more charges may follow.