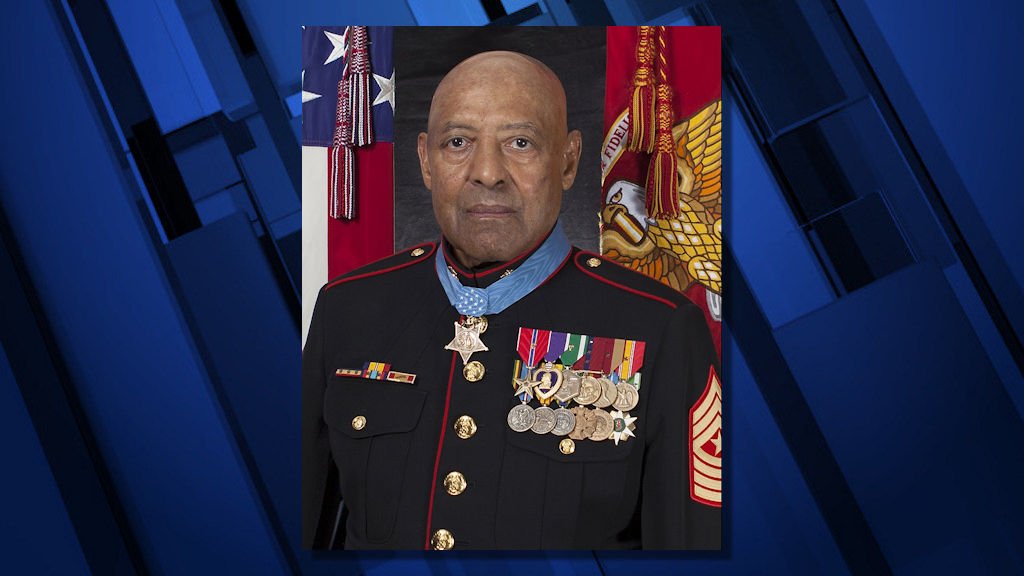 BEND, Ore. (KTVZ) — The Marine Corps has announced the passing of Medal of Honor recipient retired Sgt. Maj. John L. Canley in Bend on Wednesday after a decades-long battle with cancer. He was 84.

“Sgt. Maj. Canley passed away in Bend with his family at his bedside,” said Thursday’s announcement, which continues in full below:

Sgt. Maj. Canley was awarded the Medal of Honor in 2018 for his actions in 1968 during the battle Hue City, Vietnam.

While serving as the company gunnery sergeant for Alpha Company, 1st Battalion, 1st Marine Regiment, Sgt. Maj. Canley and his Marines fought off multiple attacks as they patrolled the city streets to relieve another company of Marines.

According to the award citation, Sgt. Maj. Canley repeatedly rushed across gunfire-swept terrain to carry wounded Marines to safety during firefights with the enemy forces. After his company commander was severely wounded during a fight, Sgt. Maj. Canley took command of his company for three days and led the Marines through battle in Hue City.

On Feb. 4, 1968, Sgt. Maj. Canley led a group of Marines into an enemy-occupied building to eliminate their stronghold. In an effort to draw out the enemy and expose their position, Sgt. Maj. Canley moved into an open area, receiving machine-gun fire.

His Marines located and destroyed the threat and completely took over the building from the enemy. Two days later, during a fierce firefight at a hospital compound, Sgt. Maj. Canley twice scaled a wall in full view of the enemy to carry wounded Marines to safety.

Because of his undaunted courage, selfless sacrifice and unwavering devotion to duty, Sgt. Maj. Canley was awarded the Medal of Honor. His other awards also include the Bronze Star with Combat “V,” the Purple Heart, the Navy and Marine Corps Commendation Medal with Combat “V,” and the Combat Action Ribbon.

“The actions in the face of danger Sgt. Maj. Canley took are incredible and remarkable,” said Sergeant Major of the Marine Corps Troy Black. “Sgt. Maj. Canley was a leader and a warfighter who undoubtedly contributed to the battles won in Vietnam. His first priority was and has always been his Marines – a true example of Semper Fidelis. I’m saddened by the loss of such a great Marine, yet I’m grateful for the legacy he established for generations of warriors.”

Sgt. Maj. Canley was born on December 20, 1937, in Caledonia, Arkansas. He enlisted in the Marine Corps in 1953 and retired in 1981 as a sergeant major. He deployed on three combat tours to the Vietnam War and served as a rifle platoon leader, company gunnery sergeant and company first sergeant.

Sgt. Maj. Canley’s legacy will live on through the USS John L. Canley (ESB-6), currently preparing for its christening scheduled for June 25 in San Diego. The ship is a 90,000-ton expeditionary sea-base and will be forward deployed in the Western Pacific.

Sgt. Maj. Canley will be buried with full military honors at the Arlington National Cemetery at a later date to be determined.