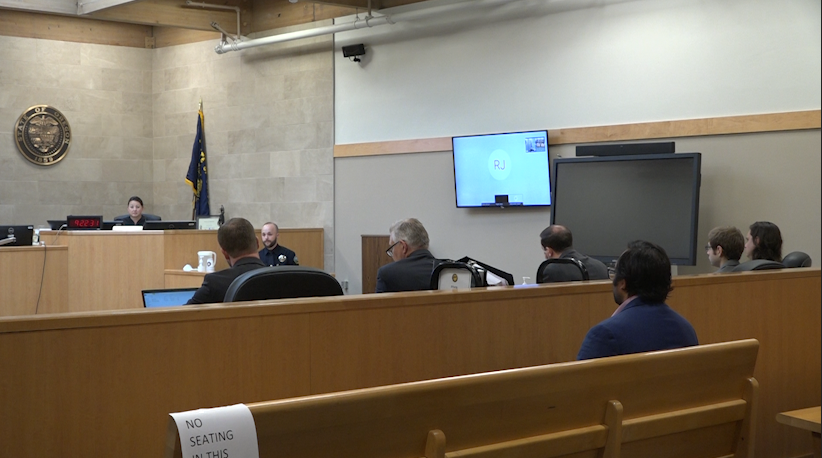 After jury is led out, judge tells defense attorney: ‘I’m perfectly capable of conducting this trial without you telling me how to do my job.’

BEND, Ore. (KTVZ) — A prosecutor’s line of questioning of Ian Cranston’s fiancé about the night in September 2021 that Cranston fatally shot Barry Washington Jr. prompted numerous defense objections and a verbal skirmish between lawyers, prompting the judge to remove the jury and issue stern warnings to both about their behavior.

Day 2 of the trial had started in routine fashion, with several police officers testifying about what they saw that night in downtown Bend immediately after the shooting outside the nightclub where both had been.

During Butler’s testimony, both Sali and Swart began voicing objections over each other’s words and actions.

Bagley said, “Just want to hear the question. So go ahead, Miss Butler, you can respond.”

The prosecutor then started to interrupt Bagley.

“Well judge — and I’m sorry to interrupt you,” Swart said.

The defense lawyer then spoke again while the state was speaking, with their own statement.

“At this point, but let us see (what) she actually told the police officer.”

Bagley was not happy with the state and defense interrupting her.

“Don’t raise your voice at me. Everybody sit down, please. Ladies and gentlemen, I need to excuse the jury right now,” she said.

After the jury was led out, Bagley told the attorneys, “Now, if you have an objection to (make), maybe you stand up, you may make a brief legal objection. That I can identify: the evidence code or whatever it is, hearsay, facts on evidence, relevance, whatever it is. Anything beyond that is argumentative. You don’t ever raise your voice at me making an objection.”

“Mr. Swart, this is a tortuous line of questioning. You can get where you need to get faster and better in a straight line. If you have some other objection to make, you can make it briefly.”

Sali said, “He (Swart) is asking questions, because he knows very well that the question is not what she wanted to do on that occasion.”

“Sit down and stop pointing your fingers, for one. I don’t like that,” the judge told Sali. “You’ve either pointed at me, or pointed at Miss Butler or pointed at Mr. Swart. That’s unacceptable. You are not going to do that,”

When Sali again objected to Swart’s questions, the judge told him, “We are moving on. I don’t need any further argument from you. I’m perfectly capable of conducting this trial without you telling me how to do my job.”

Butler testified that she saw no knife or other weapon on Washington and made no motion to indicate he had a gun and didn’t threaten to kill Cranston, Butler or their friend.

Earlier in the day, Bend Police officers who arrived on the scene first provided their testimony.

“Mr. Cranston — I wrote in my report that Ian, or Mr. Cranston had told me ‘I’m sorry to ruin your night’, Officer Cody Lyter said. “I responded to him, ‘You’re not ruining my night, bud. I’m just trying to figure out what’s going on.’ Mr. Cranston later said, “Is he going to be okay, sir?’ and I responded, ‘I don’t know.’ And then Mr. Cranston, from what I could understand, said, ‘I just reacted, sir. I just reacted.”

Officer Leigh Anne Boileau was called next to the witness stand.

” I heard Officer (Chris) Stokes say, ‘Do not reach back!’ she recalled. “And heard Mr. Cranston say, ‘It was me.’ And I confirmed, ‘It was you?’ and he said, “Yes,” and somebody confirmed. But I don’t recall if it was me or a bystander. At that point, I advised dispatch that we have found the shooter.”

Stokes testified, “As I arrived on scene, I saw Officer Boileau and Officer Lyter. My first concern was, where is the shooter? Based on experience, I assumed the shooter had fled. I was scanning the crowd to make sure I didn’t have somebody dangerous lurking in the shadows or watching us.”

Cranston’s trial is set to resume next week.